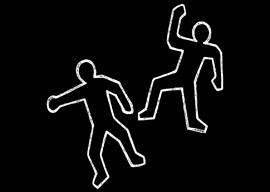 Earlier this month, John Rivers tweeted out his hope for the future:

I dream of a world where a mid­level manager in a mid­level company can accurately quote FBI crime statistics on Facebook and not be fired.

We don”t live in that utopia, however, so you should be cautious about mentioning this article at work. But at least accurately quoting government crime statistics is more convenient than ever due to the publication of The Color of Crime, 2016 Revised Edition.

Researched and written in a sober, judicious manner by veteran economic analyst Edwin S. Rubenstein, this is the first update since 2005 of Jared Taylor’s American Renaissance magazine’s venerable report on racial differences in crime rates.

Most of the government data used in the report ends with the year 2013, and therefore generally offers an encouraging contrast to the last report’s use of 2002 as its terminus. From 2002 to 2013, most crime rates fell, and racial differences moderated somewhat.

An epilogue to this 12,000­-word study, however, deals with the alarming spike in homicide rates in 2015 during the Black Lives Matter agitation. The Washington Post reported in January:

The number of homicides in the country’s 50 largest cities rose nearly 17 percent last year, the greatest increase in lethal violence in a quarter century. A Wonkblog analysis of preliminary crime data found that about 770 more people were killed in major cities last year than the year before, the worst annual change since 1990.

It’s tragic but hardly unexpected that the anti­white race-baiting by the Obama Administration, the Soros Foundation, and the national media has led to hundreds more blacks being murdered by other blacks.

“A body with a hole in it demands attention.”

After all, that’s also what happened in the 1960s, the last time liberals grabbed control of the criminal justice system. During the Warren Court era, incarceration was driven way down per crime committed, so, amazingly enough, more crimes were committed. Before that historic mistake was finally rectified, much of urban America had been reduced to depopulating slums.

Rubenstein carefully walks readers through the different sources of statistics about crime and race, such as arrests, imprisonment, and interviews with victims.

The more severe the crime, the worse the racial ratios tend to be. For example, California data is instructive because it carefully breaks out Latinos from whites, whereas federal statistics usually lump whites and Hispanics together. In California, blacks are arrested for homicide 8.6 times as often as whites (down from 9.8 times in 2002) compared with 2.5 times for Hispanics (down from 3.6 in 2002). Robbery, a career that favors the athletic and fleet of foot, is even more of a black specialty, with a black-to-white ratio of 13.4 (down from 15.9 in 2002) versus 2.0 for Hispanics (down from 2.7).

In contrast, in California, blacks are arrested for driving offenses only 1.7 times as often as whites, and Hispanics merely 1.3 times as often.

Or, to use national statistics, blacks are incarcerated 13.1 times as often as whites in state prisons for robbery but only 2.6 times as often for “other property crimes.”

Rubenstein makes the important point that this pattern of lower racial ratios for less vicious crimes is inconsistent with the conventional wisdom that racial differences must be the result of blacks and Hispanics being the victims of discrimination by police and juries:

Almost without exception, the black/white and Hispanic/white arrest multiples are lower for the less serious crimes. Whatever else this difference may mean, it is strong evidence that the police are not making biased arrests. Police have broad discretion as to whether they will arrest someone for forcible touching, shoplifting, or setting off a false fire alarm. If racist police wanted to vent prejudices on non-whites, these are the crimes for which they could most easily do so. They can walk away if someone complains he was spat on, and if they are racist they can walk away if the spitter is white but make an arrest if the spitter is black. Police cannot walk away if someone is lying on the sidewalk bleeding from a knife wound.

A body with a hole in it demands attention.

Interracial violence, contrary to the impression you might get these days from the obsessions of respectable media outlets, is overwhelmingly skewed toward victimizing whites (and Asians):

In 2012 and 2013, blacks committed an annual average of 560,600 crimes of violence against whites whereas whites committed only about 99,400 such crimes against blacks. This means blacks were the attackers in 84.9 percent of the violent crimes involving blacks and whites.

The differences in propensity toward interracial violence are noteworthy: