Racism to the Rescue! 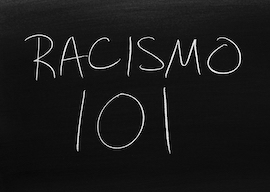 As a teen in the early 1980s, no issue was more important to my friends than the “imminent” threat of nuclear war. “Reagan’s gonna blow up the world! The Soviets just want peace. If we don’t ban the bomb, World War III will kill us all.” We young ’uns found cohesion and camaraderie in the antinuke cause. It was us against the ruthless, greedy, warmongering adults who didn’t care if they left us a world of nuclear winters and irradiated cities. As kids, our hands were clean. There were no teens with their finger on the button. It was all the responsibility of the oldies. We were the youth movement, making our voices heard, fighting for our very lives.

This was the same kids-vs.-adults group dynamic that drove the hippies. “Hey, you buttoned-down squares, we’re old enough to go die in your pointless wars, but we can’t drink, vote, or smoke pot.” Again, it was young vs. old…the peace-loving longhairs vs. the warlike crew cuts and their draft boards.

When “global warming” captured the imagination of the youth market in the 1990s, same deal. “You greedy capitalist adults are killing Mother Earth with your pollution and plastics! You’ll be leaving us a barren, used-up world.” Once more, we see us vs. them. No child, no teen, operated an oil refinery or coal mine. The young were fighting for their lives against selfish grown-ups who, unless they were stopped, would turn the world into Bartertown (and looking back, why the hell did we resist that?).

And now we come to the reason today’s politically woke kids are such pussies. All last year, the No. 1 issue among “youth activists” was gun control. “There are too many school shootings! We’re dying in our classrooms! We can’t even safely walk down the hallways. We live in fear…help us!” See the difference? Today’s anti-gun youth activists are all about “save us from ourselves.” The Hogg Generation isn’t about young vs. old; it’s about begging adults to stop kids from killing other kids. “We can’t stop murdering each other! We’re a generation of psychopaths! Do something, adults, do something! Keep guns out of our hands!”

This is why I have zero respect for these young dumb-asses. Can’t stop shooting each other? Sort that shit out yourselves…don’t bother responsible gun owners.

“The social justice crowd wants mass nonwhite immigration so badly, they’ll even support racist rhetoric to get it.”

Hoggelian hysteria has petered out this year, almost certainly because it doesn’t have the allure of ’Nam, nuclear war, or environmental catastrophe. Most kids never experience a school shooting. But being drafted, getting fried by a nuke, or inheriting Waterworld, those concerns affected kids regardless of race, class, or personal experience. Hence the current renewed focus on “man-made climate change.” That’s an issue a bug-eyed bimbo like Ocasio-Cortez can run on to capture the youth vote. “They (the evil adults) are poisoning the earth that you youngsters will inherit.” Ocasio-Cortez may no longer be a teen, but since she has the mind of a toddler, it kind of evens itself out. And she understands the primal desire to see things as “us vs. them,” which usually works better than us vs. us.

Except…not always. Not when it comes to immigration. Last week, U.S. District Judge Richard Seeborg (you’re not gonna believe this, but the guy’s a San Francisco Obama appointee!) halted the Trump administration’s policy of forcing some asylum seekers to wait on the Meh-hee-can side of the border until their claims can be heard by a U.S. immigration court. I’m not gonna get all outrage-filled over this one…I mean, does it even matter anymore? Trump was recently in California, where he ventured to a border town to proudly show off a plaque representing his nonexistent wall (said plaque having been presented to him by a wizard from Emerald City. “Read what my plaque says: wall! Ain’t it the truth, ain’t it the truth”). Trump’s DHS has released more that 17,000 asylum seekers and illegals into the U.S. over the past month alone (125,565 since December), and it’s become crystal clear that a policy that should be left to a guy like Kris Kobach is squarely in the hands of Jared Kushner instead. So what does one leftist Frisco judge’s ruling even mean? It’s like getting the flu when you already have cancer.

I was, however, struck by the judge’s reasoning. In a nutshell, he wrote that the U.S. cannot tell asylum seekers to wait on the Mexican side of the border because (in honor of the esteemed jurist, I want to phrase this in the proper legal parlance) beaners just can’t stop murdering beaners. Beaners love murdering beaners so much that sending any beaner back to a beaner country is a likely death sentence, and U.S. amnesty laws prevent the return of an asylum seeker to any country in which that person may face death. To be clear, Seeborg was not claiming that these immigrants (and specifically the ones who were plaintiffs in the case before him) were fleeing a repressive system. This isn’t East Germans escaping to the West. No, the claim is that they’re fleeing an innately and incurably violent people. The threat comes from their neighbors, their local cops, their teenagers.

In other words, it’s not about “shithole countries,” but “shithole people.” Indeed, while Seeborg, in a footnote on page 19 of the ruling, states that he has no proof that Hondurans or Guatemalans will face the same danger in a Mexican border town that they would in their home country, he ends up agreeing with the plaintiffs’ contention that “they have continued to experience physical and verbal assaults, and live in fear of future violence in Mexico” (emphasis mine), even though Mexico is not the country from which they’re fleeing.

And Seeborg is not alone; he’s merely restating the standard talking point among the “amnesty for all browns” crowd: there’s no “political solution” to the Latin American refugee problem. No election will fix it, no peace treaty will solve it. These poor wretches are being driven out by the people in their own towns—the teen gangs, the drug dealers, the corrupt local cops, the neighbors who steal their possessions and rape their daughters (quick impression—Honduran Ned Flanders: “Hidley-ho, vecino-rino! Mind if I cut-diddly-ut your throat?”). Now, to be sure, leftists try to spin this argument to make it America’s (i.e., white people’s) fault: “The U.S. drug trade enriches the gangs!” That’s not untrue. “The U.S. backs hard-line governments that punish violent teens too cruelly, thus creating generations of hardened criminals.” Irrelevant, because the “they’ll die if they’re returned!” talking point also applies to refugees from Central American nations not aligned with the U.S.

And then there’s “No, it isn’t gang violence that’s driving the Central American refugee crisis, but U.S. economic policies.” In the words of leftist immigration activist extraordinaire David Bacon, although “gang violence is the most-cited cause in U.S. media coverage, migration is as much or more a consequence of the increasing economic crisis for rural people” in the affected regions. This is worse than irrelevant. That line of reasoning destroys Seeborg’s ruling, which is based solely on the likelihood of violence (“extreme violence” in their home country, and “future violence” if temporarily housed in Mexico). Under current law, the U.S. has no obligation to grant asylum to job seekers. Hence Seeborg’s concentration on the violence and risk aspect.

The ruling’s “money shot” is Seeborg’s extension of the violence argument to Mexico, even in light of the fact that the plaintiffs before him were not from Mexico, and temporarily keeping them there would not mean returning them to the hellholes from which they fled. According to Seeborg, it’s not about the specific reasons these people fled their home countries. Indeed, it’s not about any one country. It’s about how every brown country puts the plaintiffs at risk. A Salvadoran is as much at risk in northern Mexico as in southern El Salvador.

I could make the obvious point that if Latinos are that irredeemably bad, doesn’t the U.S. have a clear national security interest in a blanket immigration ban of people from the region? If Latinos are unsafe around Latinos, aren’t we unsafe around them too? But I’m more interested in putting leftists on the spot. Why you puttin’ up with all this racism, papi? Why you puttin’ up with this claim that brown folks are inherently dangerous? Why ain’tcha picketing outside Judge Seeborg’s chambers? Here’s the cynicism of the social justice crowd. They want mass nonwhite immigration so badly, they’ll even support racist rhetoric to get it.

If some anonymous white Twitterer posted a message saying, “I went to Guatemala—what a violent people. But damn, the Mexicans are just as bad!” he’d be Roseanne Barred from society. But Judge Seeborg, in the name of “The Resistance,” can basically say the exact same thing, and he gets cheers.

Not to belabor the point, but the average white can’t even say “I don’t like tacos” without being called Hitler. And here’s Judge Seeborg essentially saying, “No Latin American refugee is safe in any country run by brown people. Latin American refugees are only safe in white countries,” and every social justice extremist is cool with it.

How the hell can that make sense, unless anti-racists don’t mind anti-Latino racism as long as it furthers their cause.

I’m no fan of Mexico, but it’s not Treblinka. It’s bad parts are bad, it’s good parts are good, and I know plenty of people (Mexican nationals and white expats) who’ve lived in places like Tijuana with no problems. Seeborg’s reasoning is full of shit, as are the people who are purposely not screaming “racism” because Seeborg’s argument, “Latinos are dangerous wherever they’re the majority,” serves their interests.

Three days ago, Seeborg’s ruling was temporarily stayed by the Ninth Circuit (dafuk?). Immigration attorneys and the ACLU responded by repeating the talking point that a brief stay in Mexico for Guatemalans, Salvadorans, and Hondurans “puts the lives of asylum seekers at risk.” Because they’re not fleeing their home countries; they’re fleeing Latino people.

The teen activists who spent all last year begging adults to save kids from other kids are too stupid to be cynical. But the people currently asking us to save brown people from other brown people know exactly what they’re doing. It’s a cynical and calculated strategy, and one that lays bare the fact that leftist “anti-racists” are totally fine with racist rhetoric, as long as it’s in the service of the long con they’re pulling on this nation.