Rahmbo: Shape Up or Fork Out 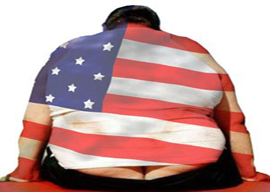 An Israeli ballerina-turned-Mayor of Chicago is now demanding that Windy City workers participate—willingly or not—in a wellness plan. If those on the city payroll refuse to register, they’ll pay $50 a month as a penalty for not choosing what Rahm Emanuel, a big believer in the right to choose, has chosen for them.

Initially, city workers will be lined up for screening like soldiers taking a military conscription exam. If you have asthma, heart disease, or diabetes, you’ll get “wellness training to achieve long-term health goals” whether you want it or not.

How about an implanted oral sensor that detects Newport Lights, traces of Crisco, Oreo DoubleStufs, and Heineken, and then triggers a shock collar that comes in a variety of colors from which the mayor will allow city workers to choose?

In addition to incentives, the mayor’s proposal employs “advisers” who will oversee the “program.” This group of scrutinizers will “monitor progress on a bimonthly basis,” which means, on average, you get 60 days between examinations to relax and keep your PayDay candy bar on your desk rather than in a locked box in a safe hidden under the spare tire (no pun intended) in your car trunk.

“In the runup to Obamacare, what better venue than Chicago to launch another unofficial pilot program?”

Hiring “advisers” proves Rahm Emanuel is a job-creation genius! Bet he’ll even have the wherewithal to hire uniformed officers to do “Paunch Patrol” and “Adipose Analysis.”

Those who successfully stop smoking, “Party Off the Pounds,” and are found sipping wheatgrass juice from their Barack “MADE in the USA” 2012 coffee mug during impromptu visits by advisers “could”—I repeat, “could”—be rewarded by “seeing their healthcare premiums reduced.”

Ever the dedicated Boy Scout, Rahm Emanuel pledges that, like it or not, “We will help you be a good steward for your health.” Such “help” could include mandatory weigh-ins and grocery-bag inspections.

Rahm warned that “if you choose not to [participate], you’ll pay that price and that is the price you’ll have to pay.” Sorry, but that is a teensy-weensy bit scary, even for a person who doesn’t live in Chicago.