Raise a Drumstick to the Indians 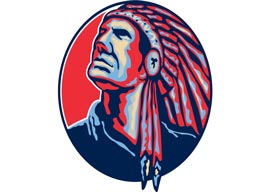 Thanksgiving is thousands of years old and can be traced back to Catholics, Puritans, and even Guy Fawkes. In the modern narrative, however, it’s a blasphemous day where we overindulge ourselves while ignoring the horrible slaughter of the American Indians. The Southern Poverty Law Center suggests we hold a Thanksgiving Mourning where we cry like a bunch of fags over what some guy’s great-grandfather did. As the father of many Indians myself, I don”t like this narrative. We didn”t just barge in and wipe out an entire people. We fought them from 1540 to 1890. That’s 350 years! They eventually lost, but nobody has proved to be as worthy an adversary as the Indians. We fought them a hundred times longer than we fought the Nazis. When we portray the Indians as an innocent tribe of peaceful hippies who were duped with “guns, germs, and steel,” as Jared Diamond would say, we make them look bad. They were warriors. After the Pueblo Indians overthrew the Spanish in 1680, they let their desert horses loose in the prairies. This changed the lives of all Indians just as much as colonization. Having millions of horses roaming the land equipped all Indians with an incredible hunting weapon. Buffalo weren”t a big deal before Indians were given horses because deer and elk were easier to catch. Now buffalo”and men”were easy game. Within one generation the Cheyenne, Sioux, and Navajo went from small-time hunter-gatherers to nomadic warriors who proudly formed alliances and destroyed their enemies. Yes, the vast majority of the killing was whites against Indians, and I”m not trying to trivialize the massacres, but it’s worth taking a moment on Thanksgiving Day to recognize how good the Indians were at fighting and how much they loved it.

Though women’s roles varied from tribe to tribe, ranging from second-class citizens (Comanche) to major authority figures (Arapaho), the men were always the leaders. Their job was to hunt and to war. They would adorn themselves with eagle feathers and paint their faces to celebrate their kills. Their value as men was directly tied to how many other men they had killed. They were not hippies. They were skinheads. They slaughtered rival tribes and threw the corpses in mass graves a thousand years before any white man showed up.

“It’s worth taking a moment on Thanksgiving Day to recognize how good the Indians were at fighting and how much they loved it.”

They fought us, but they fought each other with equal savagery. As Geronimo himself attested, the Apaches were godless heathens who only worshipped war. The Apache destroyed the Spanish and killed more whites than any other tribe. Their strong sense of community held back the American military for 40 years straight. Warring with this one tribe saw the Alamo, the Mexican-American War, and the Civil War come and go. The numbers seem to vary wildly on the casualties, but I”ve heard both sides lost about 20,000 people (census data from that time shows that was pretty much everybody). We fought against them, but whites also fought alongside them. During the American Revolution, the Iroquois banded together with the British and killed Americans in droves, often scalping them to death (can you imagine a worse way to go than having your scalp removed?). The entire continent was one big war and there was just as much red-on-red killing as there was white-on-red. After being chased out of the Black Hills by the Sioux, the Cheyenne formed an alliance with their attackers as well as the Arapaho. This alliance fought hard against the Kiowa, Comanche, and Apache, who had also banded together to gain territory.

Wounded Knee is often brought up as the worst behavior of American soldiers, ever, and it’s been described as the last battle of the Indian War. In that sense, it’s the Indian Hiroshima. It wasn”t anything to be proud of, to be sure, but as Glenn Beck points out in Miracles and Massacres, it was yet another example of men relinquishing authority over themselves and letting the government tell them what to do. Previous to the mass murder on Pine Ridge, American soldiers were transporting Indian prisoners and allowing them to remain armed. When the top brass discovered this faux pas, they insisted the guards confiscate the Indians” guns and that is when the killing began. Dozens of Indians were murdered, including women and children shot in the back. The soldiers were then presented with Medals of Honor. What we don”t hear about, however, is how thoroughly disgusted American soldiers were with these awards. The reason we know about Wounded Knee is because it was meticulously documented by whites who wanted to ensure nothing like this ever happened again. To this day, white soldiers are demanding these Medals of Honor be rescinded. The president ignores these calls and is more focused on making the Washington Redskins change their name.

Shortly before he died, I saw Howard Zinn deliver a talk at Cooper Union, where Lincoln so famously made his mark. Zinn was a smug prick who smiled mischievously as he told us, “Andrew Jackson loved killing Indians.” If we”re going to take that for granted, let’s also allow that many Indians loved killing us. While it’s clear we eventually won, it was a helluva fight and to pretend the Indians were all peace-loving wimps is to deny them that victory. They weren”t victims. They were the greatest warriors we ever faced. That’s how they should be remembered.