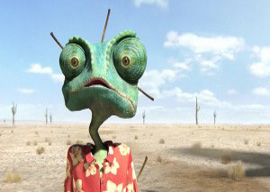 “You can never have too many fart jokes,” I explained.

Then Rango started, with Johnny Depp voicing an actor who is (literally) a chameleon, an ugly, asymmetrical reptile. And everybody, including us, finally shut up.

Yet my mouth didn”t stay closed. First my eyebrows went up. Then my jaw dropped. And that was pretty much my only expression throughout this hallucinatory cartoon Western: few chuckles or even smiles, and certainly no dabbing at the eyes, just aesthetic astonishment. As a showcase of the cross-firing neurons in director Gore Verbinski’s brain, the densely contrived Rango is staggering.

On the macro level, Rango is a predictable pastiche of virtually every Southwestern desert movie ever made. The bulk of the plot is lifted from Chinatown and the characters are borrowed from Clint Eastwood’s Man With No Name spaghetti westerns and Don Knotts’s The Shakiest Gun in the West. Yet on the micro level, Rango is alarmingly inventive, with something unanticipated thrown at you every 15 seconds.

Rango opens with the self-absorbed lizard putting on a play for himself on an eerily blank stage which turns out to be a terrarium in the backseat of a car making the Hollywood-Vegas run.

When the driver swerves sickeningly to avoid an armadillo, the chameleon flies out the window and lands splat on the windshield of the Great Red Shark convertible driven by Raoul Duke, Doctor of Journalism (whom Depp played in the 1998 film adaptation of Hunter S. Thompson’s Fear and Loathing in Las Vegas). Gesturing at the screaming reptile, Duke notes to his 300-pound Samoan attorney Dr. Gonzo, “There’s another one.” At that point, I realized I would never take enough drugs to fully appreciate Rango.

Depp’s lizard then stumbles into the saloon of the Old West town of Dirt. Its talking desert varmints”rats, moles, snakes, tarantulas, and gila monsters”are as grotesque as Ralph Steadman’s illustrations for Fear and Loathing. Yet Rango‘s CGI craftsmanship is so extraordinary that they are almost beautiful.

Casting Johnny Depp as a shallow thespian chameleon offers surprisingly harsh satire on the versatile actor’s lack of a definable screen personality. Depp can be a startling genius (Ed Wood, Pirates of the Caribbean) or an introverted bore (Public Enemies). Ads saying Johnny Depp is Rango’s voice have sold a lot of tickets, but they merely raise the question: What does Depp’s voice sound like, anyway?