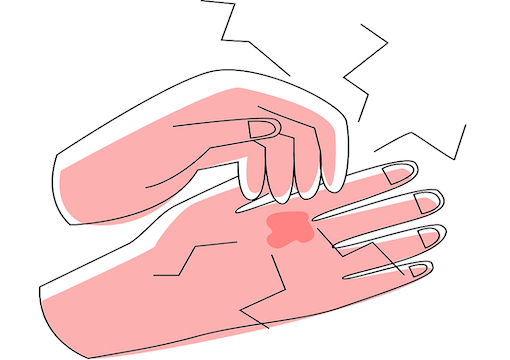 In a recent article, I mentioned the death of my friend, M…… D……, when I was 16 and he was but a few months older than I. He has been present in my mind more than usual for two reasons. The first, more or less respectable, is that, as one grows older, one lives ever more willingly in the past; and the second, perhaps less respectable, is that a malady, trivial by comparison with what he suffered from a different form of it, puts me in mind of him.

That malady is eczema. For some reason that will forever remain a mystery of the universe, from time to time I experience—suffer would be too strong a word for it—a flare-up of a small patch of eczema under the arch of my right foot. Why the right and not the left, or anywhere else on my body, is impossible to say; that I am left-handed and left-footed (in the days when I ever kicked a ball) can have nothing to do with it. Some say that discoid eczema is associated with—by which they really mean caused by—psychological stress, but I am not aware of any particular stress whenever it returns. I suppose psychoanalysts might say, as it would be in their interest to say, that the fact that I am unaware of the stress causing my discoid eczema to flare just goes to show how deeply stressed I am, and how I repress my emotions, whatever they may be. There is no way of disproving this, even if I were to undergo years of talking therapy without effect on the skin of the right sole of my foot; for then, the therapist would simply say that my therapy was still incomplete, that I was guilty of resistance to the therapy.

Anyway, my discoid eczema wakes me up sometimes in the middle of the night, though of even this I cannot be absolutely sure: I wake up with itching, but possibly not from itching. At my age, I have other reasons for waking up, which I shall not go into.

“Is all pleasure the scratch of some itch?”

Of course, one is recommended by dermatologists not to scratch, as to do so is counterproductive, however tempting and immediately gratifying. I do not follow the advice, at least if rubbing counts as scratching. I do it often with the rough skin of my left heel, and I have discovered that to rub round the patch rather than the patch itself, taking advantage of the old principle of counter-irritation, seems not to result in the bad or even dire consequences predicted by the dermatologists, and relieves the itch most pleasurably.

There is a strange thing about the whole phenomenon, namely that I do not altogether regret the appearance of my discoid eczema, in fact I almost welcome it. The pleasure of relieving the itch is so great that it exceeds the displeasure of the itch in the first place. And I know from experience that the patch will disappear spontaneously in the near future (when, presumably, my stress, or whatever has caused it, will have resolved). Therefore I do not rush out and buy the emollient creams and anti-inflammatory ointments that are recommended as treatment. I enjoy my discoid eczema for a time, though in secret. Were it to extend beyond its single small patch, the size of a nickel, or to last for as long as I live, I might take a different attitude to it.

Is all pleasure the scratch of some itch?

But M…… D…… had a different and more terrible kind of eczema, atopic eczema, which covered practically his whole body. His atopy—hypersensitive allergic reactions to common and unavoidable things in the environment—was very severe, and his chronic asthma had deformed his chest.

His eczema made his skin appear unhealthily brown, and he was scaled all over. He itched all over, all the time. In fact, he had ichthyosis. The scales or flakes of his skin mottled his clothes. They got everywhere, and only evil-smelling unguents, which he could not apply all the time, would prevent his descaling, as it were.

But no word of complaint was ever heard to emerge from the mouth of M…… D……. He bore his cross—which was soon to crush the life out of him—with patience and fortitude, and he remained far more interested in other subjects than in himself. At the time, this did not strike me as at all remarkable or heroic: It was just how he was. Nor do I think he would have much appreciated expressions of the admiration I now feel for him; he would have found them embarrassing, and he neither pitied himself nor wanted pity. And yet, looking back, I wish I could have let him know in what high regard he deserved to be held.

Children are often supposed to be inherently cruel. Perhaps they are, but cruelty can be tamed. In William Golding’s brilliant novel Lord of the Flies, the unfortunate boy nicknamed Piggy—fat, shortsighted, and asthmatic, but also highly intelligent—is taunted by the other boys. “Sucks to your ass-mar!” exclaims Ralph, when Piggy tries to explain his physical limitations to him.

Perhaps it was because my best friend when I was 6 was struck by polio and paralyzed from the waist down that I have never felt the slightest inclination to taunt anyone because of his physical characteristics, and was very early in my life sensitized to the suffering that such characteristics could cause. When a schoolmaster, taunting a fat boy (of whom there were in those days very few), said that no fat person ever emerged from Belsen, I felt very uncomfortable, though through cowardice I did not protest: For I knew, or rather intuited, that the fat boy in question would much rather not have been fat, and furthermore limped because he too had had polio, though of a milder degree. To this day I do not deny the weakness of will that is responsible for most of the obesity in the world (to deny it would be to deny the full humanity of the obese); but that does not preclude sympathy for the fat and their suffering, if indeed they suffer, or the need to refrain from insult of them.

I do not think of M…… D…… all the time, of course; I don’t suppose that he has occupied as much as 0.001 percent of my total mentation. And yet his memory continues to influence me, not as I am, but as I think I ought to be.