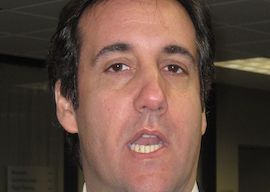 Nobody likes a rat. No one outside of his immediate family will be sad to see Michael Cohen go to prison on Monday, May 6, for three years.

I thought Donald Trump’s personal lawyer was as loyal as a golden retriever. I was wrong.

When the feds raided his office and home and prepared to charge him with tax evasion and other crimes, his friends said he would take a bullet for “Mr. Trump,” as he always called his boss. His friends were wrong.

Faced with prison, Cohen flipped. He hired Hillary Clinton’s lawyer Lanny Davis and then testified before Congress that Trump was a con man, a racist, and a cheat.

I don’t travel in the same circles as Cohen, who grew up on Long Island and went to the nation’s worst law school. I was never thuggishly threatened by him the way he tried to intimidate reporters.

But I’ve seen Cohen around the Upper East Side, where he’d power-breakfast at the Regency, as if he were a real macher, and not just a gofer whose family fortune was tied up in taxi medallions.

After the feds’ raid thirteen months ago, Cohen seemed to be enjoying his notoriety. He’d eat out nearly every night at places like Elio’s, Le Bilboquet, Avra, and the Plaza Hotel’s Rose Club.

“Cohen thought turning on Trump would save him from prison, but Cohen was wrong.”

When he became a stool pigeon, he basked in the applause from Trump-hating fellow patrons, who reportedly lined up to shake his hand one night at Omar at Vaucluse.

Cohen thought turning on Trump would save him from prison, but Cohen was wrong. Democrats don’t like rats either, especially rats that don’t tell the truth.

Cohen testified that he never wanted a job in the Trump administration, when it was common knowledge that he had lobbied hard for a position. Cohen also lied that he had never sought a presidential pardon.

A Republican congressman from Tennessee tried last week to get Cohen charged with perjury. Bye, Mr. Cohen. See you in 2022.

What a stark contrast to Anthony Pellicano, the Hollywood private detective who went to jail for seventeen years for wiretapping and other crimes.

Pellicano, recently released, could have gotten out a lot sooner, but he refused to rat out his clients—people like Bill Clinton, Arnold Schwarzenegger, Mike Ovitz, Tom Cruise, and Sylvester Stallone.

Unlike Cohen, Pellicano is a man of honor. He told one reporter he didn’t ask his friends for help: “You take your lumps and go on with your life the best way you can.”

But Pellicano’s friends are helping him anyway. They’ve given him some money to help get him back on his feet. No one will give Cohen the Canary a dime when he finishes his vacation in Otisville. No one likes a rat.

But enough about Cohen. There are plenty of others I don’t like this week, starting with Sean Penn.

As we watch anti-Maduro protesters in Venezuela being run over by armored military vehicles, I am waiting for Penn to apologize for his fanboy support of Hugo Chavez and hand-picked successor Nicolas Maduro.

Years ago, when it was clear that Chavez was consolidating his power to create a dictatorship, Penn, Oliver Stone, Michael Moore, Naomi Campbell, and their fellow travelers at The New York Times were praising the Bolivarian Revolution.

Penn once called his amigo “a fascinating guy. He’s done…incredible things for the 80 percent of the people that are very poor there.”

They are all a lot poorer now, and many are a lot deader, too. Some self-flagellation, or at least an apology, is due.

And Cher should apologize too. If Kate Smith is being eradicated from history over racist songs she sang in the 1930s, what about Cher, who sang “Half-Breed” in 1973?

For the music video, Cher wore a huge feathered warbonnet and a glittery white two-piece squaw costume that could have been designed by Bob Mackie. This is cultural appropriation at its most fabulous.

But the lyrics stereotype Cherokees, or at least half-breed Cherokees, as shiftless and promiscuous:

We weren’t accepted and I felt ashamed
Nineteen I left them, tell me who’s to blame
My life since then has been from man to man
But I can’t run away from what I am.

Unlike Kate Smith, who is dead, Cher could apologize, but she won’t. And neither will Rose McGowan for wearing a see-through dress with a leopard-print thong to the VMA Awards in 1998. Rose now says it was a “political statement.”

“I [wore] that for a reason. It was my first public appearance after being raped,” McGowan said last week. So it was Harvey Weinstein’s fault.