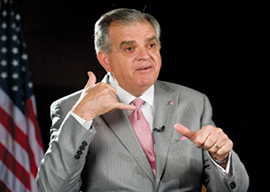 America is in debt past its eyeballs. Unemployment remains stuck near double digits. Small and large businesses, unions and insurers are clamoring for Obamacare waivers in droves. Jihadists are making a mockery of homeland security. And border chaos reigns. So, what’s one of the Obama administration’s top domestic policy agenda items this month? Combating distracted drivers.

What? You missed the Million Anti-Distracted Drivers Protest March on Washington and the Great Grassroots Groundswell for federal intervention on our highways and byways? Don’t worry. You weren’t the only one.

Making the cable TV rounds to unveil a public service announcement campaign against “epidemic” cell phone use and texting on the road, Transportation Secretary Ray LaHood revealed bizarre and alarming plans on Wednesday to install devices in cars that would block a driver’s ability to communicate.

“There’s a lot of technology out there now that can disable phones, and we’re looking at that,” he threatened. LaHood—a liberal Republican and pork-addicted Chicago crony who embodies Obama “bipartisanship”—envisions centralized government mechanisms to shut off commuters’ BlackBerries and iPhones.

And that’s just the start. “We need to do a lot more if we’re going to save lives,” LaHood vowed, while paying obligatory lip service to encouraging “personal responsibility.” Will the cell phone banners ban radios, GPS devices, makeup and fast food in cars next? All are also listed as causes of distracted driver-induced accidents.

Any death due to such reckless behavior is tragic. But by “saving lives,” what cell phone czar LaHood really means is “controlling lives.” There are already 30 states with laws in place regulating drivers’ cell phone and/or texting habits. The District of Columbia and Guam also passed bans. The safety benefits of such laws are in dispute.

The Insurance Institute for Highway Safety examined insurance claims and driving habits in Louisiana, Washington, Minnesota and California, which all passed texting bans two years ago. Its study found that when compared to neighboring states that had not yet banned texting while driving (Arkansas, Texas and Mississippi), the no-texting states actually reported higher accident rates among young drivers—while the states with no bans maintained constant accident rates. Safety officials theorized that drivers in no-texting states may have adjusted their habits to hide their cell phone use from visual detection by police—incentivizing even riskier behavior.

“Like the rest of Obama’s radicals, the Transportation Department’s self-appointed cell phone czar is a power-hungry busybody hiding behind children to expand government’s reach.”

LaHood and his fellow social meddlers have lashed out at the study and any other evidence that state enforcement of these bans is futile. But there’s a long history of government safety regulations backfiring on central planners. Back in the 1970s, the federal drive to require child safety-caps on aspirin bottles resulted in no reduction in child poisoning deaths. In fact, renowned risk analyst Kip Viscusi at Harvard Law School found that the regulations induced many parents to leave the caps off altogether because they were inconvenient and difficult to remove.

Moreover, the push for federal policing of our driving habits comes just as the federal government itself reports that the rate of teenage-related car accidents has fallen. Yes, fallen. Despite increased cell phone use, the Centers for Disease Control and Prevention (CDC) shows that when the years 2004 through 2008 were compared, there was a 38 percent reduction in the number of car accidents involving 16 and 17 year olds.

So what’s really driving LaHood? He’s pursued an anti-car ideological zeal from Day One—from entertaining proposals to impose mileage taxes on drivers and to track drivers’ routes, to redistributing tax dollars to pie-in-the-sky high-rail projects that no private business will touch, to peddling a “livability initiative” that would discourage suburban growth and corral residents in high-density areas dependent on public transportation.

Like the rest of Obama’s radicals, the Transportation Department’s self-appointed cell phone czar is a power-hungry busybody hiding behind children to expand government’s reach. If only federal agencies came equipped with anti-big government ignition breathalyzer locks.