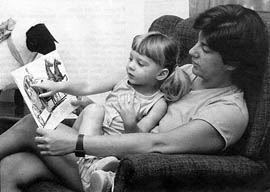 The Briterati, as I call Britain’s media pontificators on matters spiritual and temporal, are in a spin over reports that parents no longer read to their children and that the state is failing to protect the wee ’uns from pornography. It is good to drop in on Britain from time to time, if only to observe moral guardians’ ephemeral preoccupations in the columns of newspapers that fewer and fewer people bother to read.

Last time I was here, columnists were obsessing over who would design Kate Middleton’s wedding dress. All that is forgotten as the press ferrets out other tidbits to digest and regurgitate.

This week, it’s the kids. A study by the National Literacy Trust claimed that 25 percent of twelve-year-olds could not spell, that one in six Londoners cannot read without difficulty, and that most London employers have trouble finding literate employees. Apparently, only two-thirds of families with children keep books at home. Almost all of them, though, have computer games. This is not a happy picture for a country where the printing press made Milton and Dickens available to the masses.

“Civilization begins at the dinner table. Here is where we learn the rudiments of good behavior.”

The Evening Standard weighed in with a campaign to encourage parents to read to their children, something that it believes few of them do anymore. The paper also called for volunteers to read to children whose parents lack the inclination, ability, or time to do it themselves. Even Camilla, the future queen, took up the call. Ideally, Mom or Dad should put the kids to bed while telling stories or reading Beatrix Potter or Tintin. If they don’t, the volunteers plan to pick up the slack. How long this will last or whether it will increase literacy is anyone’s guess.

Regarding children’s access to pornography, the columnists have suggested remedies that fall short of interfering with Rupert Murdoch’s satellite channels’ habit of offering hardcore samplers for free without asking for proof of age. Short of bringing the police into the house, I’m not sure how you can stop it. When I was about nine, we used to sneak looks at naturist magazines in bookshops. Young autodidacts will explore all that their elders want to keep to themselves. So let the elders read to them and ask the cops to put a wall between youngsters and whatever Murdoch puts on his porn channels.