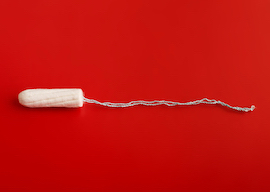 I’ve never needed a tampon, and I’m 100% certain it’s directly related to the fact that I’m a man.

Tampons are for people who get periods. Women get periods and men don’t. These were simple facts that we, as a former society, used to embrace unquestioningly, because to do otherwise would be…insane?

The problem is, people who have an adversarial relationship with reality can’t seem to rest until they’ve made everyone as crazy as they are.

My preemptive apologies to those of you who’ve been bludgeoned and/or brainwashed into submitting to a very obvious lie, but our hysteria-prone friends in the “transgender” community have a fundamentally adversarial relationship with reality. Just like the fact that I don’t have a carburetor and four tires means that I’m not a Volkswagen, the fact that you don’t have natural breasts and a natural vagina means you aren’t a woman.

But don’t try telling them that, though. They’ll do everything they can to ruin your life and make you almost as miserable as they are. Under threat of extreme and unending pain, we are required to pretend they aren’t the ones who are pretending.

Would anyone—and I mean anyone, even many trannies who simply want to live out their fantasy in peace—have supported this trans-rights thing if they knew it would immediately blossom into this annoyingly relentless, reality-impaired, destroy-all-enemies grievance-monster? I mean, due to the fact that you never stop complaining, I’m starting to think that many of you guys actually are women.

But my mission here today isn’t to address the raging majority or so of trannies who, despite the fact that gender is absolutely fluid, decide to escape the stigma of toxic masculinity and switch to Team Female. Instead, my focus is on the tiny minority of trannies who make the opposite trek across the Red Sea—those butch broads who merely can’t accept that they’re masculine females and that nature made a little mistake; no, they insist we say it was the physician who correctly identified their genitals at birth who made the mistake.

“I’ve never needed a tampon, and I’m 100% certain it’s directly related to the fact that I’m a man.”

These are the ones who want us to look reality square in the eye and lie to it—they want us to say that despite the fact that they still menstruate, they are men.

After all, you can’t say “menstruate” without saying “men,” can you? There must be a reason they don’t call it womenstruation, n’est-ce pas?

When people are accustomed to hearing crazy talk, normal talk sounds crazy to them.

If you’re “woke,” you won’t understand what I’m about to say, but if you’re even remotely awake, you will—the most problematic thing about this whole male-feminine-product thing is a purely strategic one—where do they put them? Up their ass? Where else is a “man” going to put a tampon? If they’re putting them up a bleeding vagina, then “they” are not a man and “you” are either delusional or a liar.

“Kenny” Jones is a black woman who pretends she’s a man and writes articles about it. Kenny recently bared it all for an article on self.com called “Getting My Period Made Me Feel Like Less of a Man—Even Though I Knew I Was,” a clumsily phrased headline that implies Kenny always knew he was less than a man—and further implies that Kenny would be well-suited to spend less time on hormone replacement therapy and more time hiring a good copyeditor. Like so many misfits, Kenny blames society for Kenny’s unhappiness:

Society in general still views menstruation as strictly a thing that cisgender women experience—which is simply not the case. Not everyone who gets a period is a woman, and not every woman gets a period….I knew I was meant to be a boy since I was 14. At 15 years old, I started menstruating….Getting a period made me feel like less of a man, even though my teenage self already identified as male. I, too, used to associate periods solely with cisgender women. In my eyes, a period was the opposite of masculine, and so my ego and internalized expectations of male dominance were enough to convince me to bottle it up and speak about it with no one.

Maybe you should have heeded your internalized expectations there, Kenny.

Kenny also speaks of his mind and body “battling each other.” So does a certain Cass Clemmer, a gingery “menstrual health activist” who resembles a gay young Ron Howard and thought it would be a good idea to take pictures of herself with a blood-stained crotch as some kind of creepy cri de coeur to the world about the pain attendant to telling your body that you’re a man while your body barks back, “No, you’re still a chick, you daffy broad.” Cass writes about how she feels her “body had betrayed me” and that menstruation is a reminder that there’s a “war raging deep inside” of her.”

Sounds like you girls have some problems. We’ve been saying that for years.

A poetic soul, Cass writes of the unique mental pain that accompanies menstruating while pretending you’re a man:

See my body had betrayed me,
That red dot, the wax seal,
On a contract left there broken,
A gender identity that wasn’t real.
Most people deal with blood and tissue,
And yet my body forces me to surrender,
Cause every time I get my cycle,
Is another day I shed my gender….
The blood drips from an open wound,
Of a war waging deep inside my corpse,
The battle between mind and body,
Immovable object; unstoppable force.

Sounds like it really sucks to be you, Cass. I think we can both agree on that.

Over the summer, a certain Ben Saunders—a mannish woman who insists that we play along with her delusion and pretend she’s a man—contacted Procter & Gamble, who produce the Always line of feminine-hygiene products, asking them why on Earth they would put the universal logo for “female” on a product that everyone knows is also used by trans men? Did neither Procter, nor for that matter Gamble, realize that men can have periods? Are they entirely unaware—or, far worse, so abjectly unfeeling—that they fail to realize by including a female logo on a product that women who insist they’re men (but are hampered by the fact that they’re actually still women, which is why they still menstruate—DUH!) may feel dysphoric and even catch a hint of the vapors? Were they willing to stake their entire corporate future on the outside chance that they’d be able to withstand the scorched-earth negative-PR blizzard of fire and brimstone that befalls anyone foolhardy enough to step on the immensely delicate baby toes of the Sacred Transgender Community?

(The Always brand produces pads and liners rather than tampons, but the point stands—if you strap a lady-diaper between your legs to sop up the blood that’s leaking from your vagina every month, I’m going to rule out any possibility that you’re a man, kill me if you must.)

Wisely—because hell hath no fury like a tranny ignored—Procter & Gamble capitulated and removed the offending logo from their feminine sanitary napkins—sorry, their gender-neutral menstrual products that in no way are intended to suggest that women, as well as the women who pretend that they’re men, are unclean, even if blood and mucus are dripping from them in gobs.

A woman—I think—named Sheryl from the Always marketing division decided to inform “Ben” that she had successfully bent them to her will. It was delivered as an open letter, because why inform someone privately when you can virtue-signal to the world that you are playing along with the Big Lie for fear of being hurt? It read:

Dear Ben, I wanted to come back to you regarding your message about the Always wrappers’ design with the female symbol on it you sent 18/06/2019.

We listened to you and our marketing team worked a solution!

We are glad to inform you that as of December we will use a new wrapper design without the feminine symbol.

Please just be aware that you might find products with the old wrapper design in the stores for some weeks after December, as the distribution of the new packages might take some time – the new designs should be in store Jan/Feb 2020.

We are absolutely grateful for having people like you voicing their opinions. Thank you for contacting us, your comments help us improve every day!

You may say that I’m a dreamer, but I long for the day when we can return to a more rugged, natural, and frontierlike existence—a world where the men are men, and only women wear tampons.