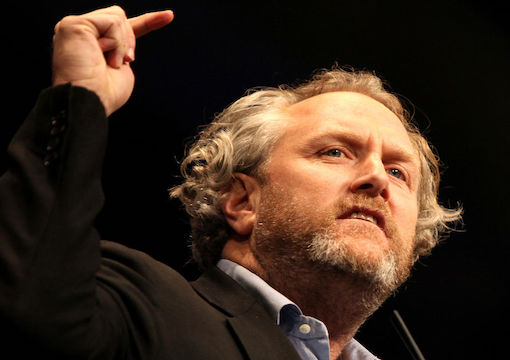 As this week’s column will post on the ten-year anniversary of Andrew Breitbart’s passing, I thought it would be appropriate to examine the man’s legacy.

I’ll start with a personal anecdote, because I don’t want to be hanged!

That could use some explaining. In August 2015 a rightist blogger called for my death by hanging because, he claimed, I was cowardly for criticizing Breitbart in my 2014 book, with Breitbart dead and unable to respond. So before you guys reach for the nooses, let me be clear that I knew Andrew personally. I’d see him at least twice a month at Friends of Abe, and the first Breitbart-critical piece I ever wrote, for the blog Yes But However (owned by a crass wop named John Romano who’d previously written for Big Hollywood), ran in July 2010, when Andrew and I saw each other often.

“Andrew was great in his time. But much of what he advocated doesn’t apply to ours.”

Breitbart could be passive-aggressive, but he was also quite good at being aggressive-aggressive. One evening, during an FOA beer blast, Breitbart grew so enraged at his former protégé Romano that he threatened to beat him with a pool cue! Romano was so cowed, later that night he wouldn’t go to the bathroom because he’d have to pass by where Breitbart was playing pool.

Sitting at my booth, alongside my young friend Vanessa, goombah Romano was crying from the pain of his aching bladder. “Malagamaloocci, I gotta piss like a sonomabicci. But I ain’t walkin’ past that stronzodemerda.”

Vanessa took Romano to the ladies’ room (which was on the other side of the bar), so he could pee while she guarded the door.

My point being, Andrew knew my criticisms, he saw me regularly, and he never chased me into a girls’ bathroom with a pool stick. We had a détente.

There’s much that’s positive in Breitbart’s legacy: He pioneered conservative “new media,” and no one labored harder to make conservatism look cool and culture-savvy.

Breitbart also pioneered the “Democrats are the real racists” talking point. I always knew this would spell trouble for the right, long-term. Because implicit in that “dunk” is the belief that it’s the duty of both parties to root out “racists.” That’s a narrative that should be challenged, not furthered. Screaming “Democrats are the real racists” doesn’t bother leftists; they’re just happy you’ve joined the hunt (back in May 2011 Breitbart told CBS News that his ideal GOP presidential ticket would include two black people, because that would finally prove that Republicans aren’t racist).

I also found myself ill at ease with the personality cult that surrounded the man. It wasn’t that I begrudged him his acolytes; he earned them. It’s that I saw a messianism among the superfans that troubled me, a desire to “white knight” that reached teen-girl swooning levels. When Breitbart bollixed the Shirley Sherrod “scoop,” it became verboten in my circle to speak the plain truth of his gross mishandling of the story. Moreover, his followers began peddling ridiculous claims that Breitbart only pretended to screw up in order to trick his enemies into something something something.

Yes, Breitbart was the right’s first 4D-chess whiz. The messianism I witnessed on a small scale in 2010 would be repeated on a grander scale by MAGAs once Trump abandoned his platform and decided to rely on blind adulation rather than actual accomplishments.

I’m not bringing this up to pummel a dead man. But one of the right’s greatest flaws is its reluctance to switch tactics as circumstances change. Breitbart was a man of his time; much of what he advocated wouldn’t fly now. For example, his strategy of “giving as good as you get” (i.e., leftists call you a Nazi, you call them a Nazi back; they say “fuck you,” you say “fuck you” back) only worked when social media didn’t play favorites, when, generally speaking, right and left could post equally.

That strategy’s worthless now, because rightists don’t get to say “fuck you” on any platform where leftists dwell. Users, links, and videos get deleted, and conservatives flee to online ghettos where they end up saying “fuck the left” to each other.

These days, if a black leftist insults you on Twitter, you can only respond in the most restrained, respectful manner. And if a tranny insults you, you pretty much can’t respond at all; saying “boo” to a tranny is seen as akin to murdering them.

Plus, the very idea of “owning the libs,” popularized by Breitbart, has became synonymous with electoral impotence (“we won the meme wars!”).

The first-term Obama years (the years of Andrew’s ascension and peak) were a paradise compared with what we have now. As I pointed out in 2017, Obama clinched the 2008 primary (and by extension the election) with his March 2008 “More Perfect Union” speech in which he criticized leftist racial manias like “white privilege” and “endemic white racism.” No speech like that could be delivered by a Democrat today (including Obama).

Can you imagine any Democrat in 2022 holding that “beer summit” (inviting a cop accused of racism to the White House for a sit-down with his accuser)? Obama had not yet “evolved” on gay marriage, Americans could still recognize that biological women exist, and Democrats (regardless of how they truly felt) still gave lip service to law and order and border security.

In 2010, Breitbart’s antics were unobjectionable because the true extent of how far the mainstream left would go to attack and destroy white (“cis male”) America was unknown to all but a few farseeing commentators. We were still in the age of “that damn Obammer might raise taxes and do an insurance exchange!” So Breitbart’s “I’ll prove how not-racist I am” pundit-against-pundit warfare seemed harmless enough.

But remember that it was warfare to benefit the likes of Romney and Boehner. It was warfare that concentrated on electing Rs, without focusing on “but why elect Rs?”

These days, I see so much agitprop from left and right and I think, “Who’s this aimed at?” Like the whole “Jim Crow 2.0” thing. Who’s that for? Not persuadable voters; the idea that democracy is ending and slavery’s coming back is way too hysterical to attract independents (hence the positive polling for voter ID). Such overstatement is aimed at the base. But why? Your base is already on your side.

On the right, I was dumbstruck last week when Tucker Carlson opened with a monologue about how Democrats refuse to accept election losses. Employing his grating fake laugh (easily as annoying as Kamala’s) at a higher-than-usual pitch, Tuck played the cobweb-covered clips of leftists crying and wailing in November 2016.

“Ha-ha-ha-ha! Look at ’em! Babies! Crying because they lost!”

Again, who’s this for? Working-class voters aren’t still living in 2016; only MAGAs are. Moreover, whether they consider 1/6 an insurrection or a riot, whether they think Trump was culpable, all voters know that rightists just took an election loss very poorly too.

Tuck’s rehash of the 2016 crybaby footage was pure Breitbartism. They say you can’t accept election results? Tell them no, they can’t accept election results! And since partisan punditry is by nature hypocritical (pundits have to shift positions as parties/ideologies realign in changing circumstances), these “hypocrisy finger-pointing loops” (“You slammed BLM but you favored 1/6!” Well, you slammed 1/6 but favored BLM!”) are infinite.

And pointless. Because the average American doesn’t care about the pundits. So last week, when Tucker claimed that leftist Americans are a bigger threat than Putin, and leftist pundits pearl-clutchingly replied, “How dare you claim Americans are the enemy,” and Tucker countered with “Hey, you’re the ones who reacted to 1/6 by claiming Americans are the enemy,” a new Breitbart loop was born, one that’s completely masturbatory on both sides because the average American rejects both the violence of 1/6 and the notion of U.S. boots-on-the-ground conflict with Russia.

As I said, this kind of gameplay was understandable back when it was Obama vs. Boehner/Romney. When “your guy” is separated from “their guy” by degrees not oceans, it’s not that easy to sell your message to voters, because the stakes don’t seem terribly existential. So why not treat the entire thing as a game? Have fun with it.

But the stakes are too high for that today. The left’s agenda is laid bare: open borders, demographic replacement, the end of criminal justice and incarceration, the dismissal of biological sex, propaganda in schools telling white kids they’re ethically inferior and cursed by history, etc.

Regarding direct appeals to working-class (white) voters, the right’s hand has never been stronger. So when the left uses Saul Alinsky diversionary tactics, it has to because its actual platform is so toxic. Rightists don’t have to follow suit. The right’s key to victory is to not use Alinsky rules and not become distracted by Breitbart loops. Rightists must accept the fact that they don’t need to play diversion games. They just need to play their hand.

Breitbart’s “own the libs” strategy was fine in its day. But that day’s over.

I’ll make one more point: I think Breitbart inadvertently assisted the rise of woke. His mantra (the “Breitbart Doctrine”), “politics is downstream from culture,” emboldened Hollywood execs, actors, musicians, ad agencies, and corporate PR flacks to think they have way more influence than they actually do. If you tell those half-wits that their movies, TV shows, and commercials alter the course of human events, they’ll act the role.

But that didn’t happen, because more often than not, pop culture doesn’t set trends, it follows them. Or, to be more precise, it follows perceived trends, as job-insecure network and studio execs scurry around trying to latch onto the “next big thing” (and usually, they get it wrong).

These people aren’t “masterminds.” They bluff for a living. But boy, do they love hearing that they “influence culture.” It feeds their egos, staves off their insecurities.

Did Hollywood tell kids to vape? No, just the opposite. And it’s not Gillette commercials that’s making kids go tranny. Kids respond to their immediate environment: what their teachers force upon them, what quacks claim is “good for them,” what their parents tolerate, and what their peers require for “pack” inclusion.

The Breitbart Doctrine gave artists an overblown sense of their own importance. These people aren’t sending ideas downstream; they’re downstream themselves, sucking up the jetsam.

To restate, it’s not my intention to speak ill of the dead. There’ll be plenty of positive things written about Andrew today; I just want to bring a little perspective. Andrew was great in his time. But much of what he advocated doesn’t apply to ours.

Andrew Breitbart innovated new media and helped keep morale high during the Obama years. So say a prayer for a good man, and move on.