Reason is Racism, Ignorance Is Strength 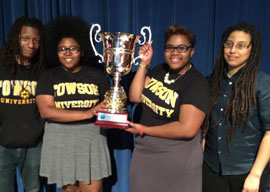 After all these years of bloviating, I still can”t tell in advance what will get people riled up. I”ll spend hours in research for a good deep thumb-sucking piece on Pacific theater geostrategy, and it falls dead-born from the press. Another time I”ll procrastinate until an hour before deadline and then, half drunk and yearning for sleep, knock out 1,000 words about the fluff in my navel”and next morning my inbox is bursting with impassioned readers saying “Yessss!!!” or “Are you serious?” or “You are insane and should be locked up.”

Thus it was with a passing mention of CEDA 2014 in the May 3rd podcast of Radio Derb. Those few offhand remarks got my biggest email bag of the year so far.

CEDA is the Cross Examination Debate Association. It describes itself in its constitution as “a national intercollegiate debate organization” with a mission to “create and support a community of scholar-advocates within the larger; [sic] institution of higher education who [sic] respect one another as seekers of knowledge and agents of social justice.”

Well, CEDA has an annual tournament where schools from around the country field teams of debaters, two persons per team, to debate some issue of moment before a panel of judges.

For the CEDA 2014 Nationals, held at Indiana University in Bloomington this past March 21-24, the motion before the house was that the U.S. president’s war powers should be restricted.

“You might think that the white people who run CEDA would be embarrassed by all this. Not a bit of it!”

Here is an extract from the argument against the motion, presented by two young black women from Baltimore’s Towson University. I haven”t been selective; it’s all like this. You can watch the entire final debate here. This extract begins at 1:55:05 on that video.

To these weighty arguments, the motion’s defenders, two young black men from the University of Oklahoma, responded thus (extract beginning at 2:14:37):

Before death is eternity. After death is eternity. There is no death, there is only eternity, and I ride the wings of eternity like Yah! Yah! Yah! Shee”clack, clack. See, my time is … my [incomprehensible] doesn”t go undisturbed because time makes dreams deferred, and I”m a times turning my days a daymares and my nightmares [incomprehensible] my passion. Click, click! The nigger tom beating my ass, and yo, I be having dreams of chocolate-covered watermelons …

The judges ruled that the Towson ladies had won the debate. The emcee, a middle-aged white guy in a suit”I think it’s CEDA President Paul Mabrey”announces the decision at 3:47:43. The people in the debate hall, mostly white, academics and students from the look of them, burst into applause and cheers.

The enthusiasm of the white spectators and supervisors was shared by the press. Carrie Wells of the Baltimore Sun wrote a respectful story about the winners.

Ameena Ruffin and Korey Johnson, both from Baltimore, bested a team from the University of Oklahoma in the final round. … The team spent untold hours poring over books, articles and other publications to craft their arguments, then took more time to practice their delivery strategies, she said.

The local Fox channel was even more respectful, with hostess Megan Gilliland”white, of course, like Ms. Wells”swooning over Mss. Ruffin and Johnson as if they were not the barking savages they had presented themselves as in the tournament, but victors in a genuine battle of wits with opponents deftly deploying the figures of classical rhetoric in the service of reason. The debaters simpered back winsomely at Ms. Gilliland.