I am pleased to announce that a new edition of my 1993 book, Reclaiming the American Right: The Lost Legacy of the Conservative Movement, is due out in May from the Intercollegiate Studies Institute. This edition features an Introduction by Prof. George W. Carey, plus analytical essays by the wondrous Scott Richert and that well-known polymath David Gordon. 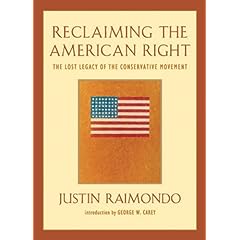 I have to say that I am thrilled the book is coming out, especially at this time, when the Old Right appears to be making a major comeback. I am also somewhat amazed at the book’s continuing appeal: what was meant as a polemic, of sorts, written for the times (the early 1990s), reads pretty well today. Here are the opening lines:

“After a decade in power, why has the conservative movement failed to make a dent in the growth of big government? After taking over the Republican party in the sixties, and then capturing the White House in 1980, conservatives are baffled to discover that the power of the federal government to tax, regulate, and invade every aspect of our lives has not lessened but increased over the last decade. Bewildered, frustrated, and demoralized, the men and women of the Right are asking themselves: What went wrong?”

Conservatives are still asking themselves that question, only louder, and with much more urgency. You can pre-order my book from Amazon.