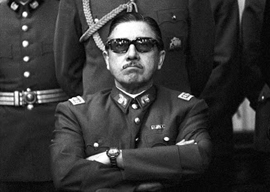 With the passing of Hugo ChÃ¡vez, we got a lot of crocodile tears from liberals claiming we had “lost a friend“ who “lifted the poor and helped them realize their dreams.” Jimmy Carter told us that he “never doubted Hugo ChÃ¡vez’s commitment.” The Nation lamented that “he wasn”t authoritarian enough.” I haven”t seen this much love for a Latin American tyrant since Che Guevara became a T-shirt.

But if we”re going to perform oral sex on every despot who can”t pronounce the letter “J,” why not Pinochet?

In 1973, Augusto Pinochet was faced with a dilemma: Let the communists control his country or stand and fight. McCarthyism and the Cold War get a bad rap these days, but communism was responsible for millions of deaths and was spreading all over Central and South America like a red plague.

Pinochet chose Door #2 and led a military coup against President Salvador Allende that was nasty and brutal but pretty much the norm as far as coups go. He killed thousands of people, but so did Che. Where’s Augusto’s T-shirt? Why did The Nation call him “murderous” while acting as if Che and ChÃ¡vez were the greatest things since sliced tortillas?

Where Allende had taken land from the rich in a Castro-like redistribution program, Pinochet gave it back. He traveled the world talking to economists, politicians, and academics. Critics of libertarianism call Milton Friedman a “Pinochet sympathizer,” but all Milton did was take a meeting where he told Pinochet that dictatorships don”t work in the long run. He also explained that Chile would thrive if the market were given free rein.

He was right. Chile’s GDP is soaring, and it’s mostly because of the policies Pinochet enacted in the 80s. When he met with Margaret Thatcher in 1982, she told him she”d like to set up a military base there so Britain could better protect the Falklands. They became best pals, and rumors abound of backroom copper deals made with Britain due to his cooperation.

Yes, Pinochet enforced curfews where nobody was allowed to be on the streets from midnight to 6AM. So what? This happens in Glasgow every time there’s a crime spree. Besides, having a curfew doesn”t mean you can”t party. All it means is that at 11:30 you have to decide if it’s worth staying all night at this party. If the curfew ruined your party, it wasn”t a good party. And isn”t that what’s behind all this whining about Pinochet? People who didn”t have much going on are blaming the guy who kicked out a communist dictator and turned Chile into a civilized, clean, wealthy, and prosperous nation. If you wanted to make money in Chile, the doors were open. If you didn”t, well, that’s your fault. He may have started out as a dictator, but he left voluntarily when he was voted out of office in 1990. That’s not a fascist. That’s a great guy.

This theory looks great on paper, but it behooves a writer to do a last-minute check with “the people” before sending his essay off to the editor.

I started talking to Chilean expats here in New York. Raving homosexual Mauricio Santelice is an executive pastry chef at the Dream Hotel in Chelsea. He came here in the 1990s after spending his entire childhood and adolescence under Pinochet’s rule. When I told him my theory about the parties, he told me to go fuck myself. “If they caught you on the street at night they would beat you bad,” he told me angrily. “They”d knock out your teeth and break your bones. They”d even pull your hair out. And if they caught you more than once it would count as a felony and you”d be off to jail without a trial.” Mauricio said that the curfew also meant no nightlife, which ultimately meant no youth culture. I told him Pinochet had to be strict because he was up against the communists, and Mauricio looked at me like I just took a shit inside his head. “My sister would protest him a lot growing up,” he said. “They would spray the protestors with water cannons filled with sewage that had permanent blue dye in it. When the police saw someone on the street who was blue, they would beat them worse than someone out past curfew.”