Red Flags and a Red Rose 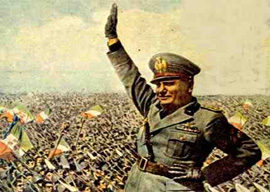 Each year on April 25, Italians commemorate Italy’s 1945 liberation with yet another public holiday. Any sane person would think this ought to involve honoring those who did the liberating: the British, the Canadians, the Australians, the New Zealanders, the Indians, the Poles, and, of course, the Americans. It does not.

This April 25th, I visited the graves of the British and Commonwealth soldiers buried at the Allied War Cemetery in the provincial city of ForlÃ¬ in the “red” area where I live. I go to the cemetery every now and again to remind myself of many things. As usual, there was not a soul there and only three people had signed the visitors” book that day out of a grand total of 22 this year.

Meanwhile that morning, the toxic derivatives of the Partito Comunista Italiano had assembled en masse as usual in Piazza Saffi in front of the Town Hall which they have run since the end of the war to praise themselves and to tell everyone that only they and their values stand between freedom and dictatorship.

From the start, the Italian left hijacked Liberation Day and turned it into a eulogy to itself founded on two grotesque lies: that the Italian partisans played a pivotal role not only in Italy’s liberation but in restoring democracy. These same lies are taught in Italy’s schools and universities all year round to this day and are repeated ad nauseam in the press and on television.

“The partisans had fought not for Italy but for Stalin, not for democracy but for dictatorship, and not for freedom but for communism.”

Yet anyone who dares to question these shameless lies is shouted down as a fascist”even an Englishman such as me, whose country was brought to its knees to liberate these people, and who never knew his only uncle who was a navigator on an RAF Lancaster bomber shot down over DÃ¼sseldorf in 1944, missing and presumed dead.

The truth is this: American, British, and Commonwealth troops liberated Italy. Full stop. Yes, the partisans were mainly communists, but they were militarily irrelevant. The joke among the cognoscenti is that the only things they liberated were prosciutti (hams) and polli (chickens).

But thank God for that.

For a very simple reason: The partisans had fought not for Italy but for Stalin, not for democracy but for dictatorship, and not for freedom but for communism. They had the nerve to call themselves patrioti but were in fact internazionalisti hell-bent on the nation-state’s destruction. If the partisans had their way, Italy would have become a part of the Soviet Bloc run by Stalin’s chosen Italian, Palmiro Togliatti, who had returned in 1944 after 18 years of exile in Russia. Post-communist Italians are nowadays among those most keen on a United States of Europe and the doomed and dictatorial euro currency.

So whenever I see, as inevitably I do each April 25, the large piazza in front of the Town Hall festooned with the Italian flag I feel even angrier. The flags are attached to lampposts put up during the fascist era which still have the fascist emblem embossed on them. And that makes me angry as well because it reminds me of something else: One day the Italians were all fascists, the next they were all partisans.

Do not make the mistake of believing that other old left-wing lie that Benito Mussolini and fascism were imposed on the Italians. His admirers included Franklin Roosevelt, who invited him to America in 1933, and Winston Churchill, who that same year described him as “the Roman genius.” American ambassador to Rome in the early 1920s Richard Washburn Child later described him as “the greatest figure of his sphere and time.”