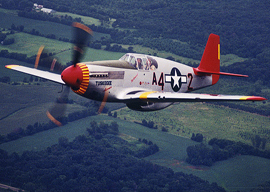 One would be hard-pressed to name a city in America without a Holocaust memorial, though it’s difficult to understand why this entirely European tragedy must be constantly mentioned in the United States.

One would be equally hard-pressed to name a city in America without a street named after the Tuskegee Airmen, or an airport, Air Force base, or military installation deprived of a huge exhibit honoring the Red Tails.

At the National Air and Space Museum outside Washington, DC, the Spirit of Tuskegee—this holiest of planes—overshadows the other exhibits not for being the plane that broke the sound barrier, but for being the vehicle that propelled black people to break the infinitely more important color barrier.

“That the glorification of the black pilots is almost entirely based on lies—it wouldn’t be a stretch to say that 1986’s Iron Eagle is based on more truth—doesn’t matter.”

Schoolchildren across America watch HBO’s 1995 The Tuskegee Airmen movie as the source material for this courageous story of black people proving they could fly planes just as well as whitey. (Never mind that less than two percent of pilots in the US military today are black and that major commercial airlines show similarly low quotients of black pilots.)

Does it matter that the 1995 movie is largely a Hollywood production based on now-discredited lies such as the “never losing a bomber” myth? Not really. Only a Tuskegee Airmen Denier—basically the equivalent of a Nazi sympathizer—would dare question the legitimacy of the “Red Tails” story. America has racially progressed to such a point that the mere thought of questioning the official Tuskegee Airmen story would be on par with a European asking if “six million Jews” really died in the concentration camps.

Today, George Lucas has decided to one-up Tyler Perry’s determination to be the lone filmmaker who makes movies targeted primarily to black people by releasing Red Tails. The film purports to tell the true story of those black fighter pilots who trained at Morton Field in Tuskegee, Alabama, ultimately defeating the twin evils of Jim Crow and Nazi Germany in the process.

Much of the glory surrounding the Tuskegee Airmen’s success was situated around the superlative, almost unbelievable tale that not one of the bombers they escorted was ever lost. For 62 years this story went unchallenged, largely because of the reverence and esteem that had been built up toward these black aviators who were so pivotal in the integration of not only the armed forces, but America as a whole.