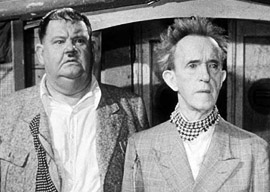 Whenever I gave expert evidence in murder trials, I looked at the jury and thought, “What a rabble! How on earth can you expect them to come to any proper conclusion?”

None of them ever dressed for the occasion. As they trooped in and out of the jury box, I thought how unattractive and undignified modern clothes are, and how practically no one these days has any self-respect (by comparison with self-esteem). They all looked as if they had come to court after a hard night’s dissipation, and had just popped round to the corner shop for a pint of milk to calm their gastritis.

As the lawyers argued about the more abstruse point of mens rea, one of them would suddenly find a transcendent interest in his fingernails, while another would search in her plastic bag to check whether her chocolate bar was still in it. A third would count the flies on the ceiling. But at the end of the trial, something funny happened: The jury got it right! They arrived at a sensible verdict, and on the one occasion on which I thought they got it wrong, their verdict was not completely without reason. My faith in humanity and its ability to take serious things seriously was marginally restored. Juries are not easily deceived”unlike, one is tempted to add, electorates.

And, of course, as soon as the results of the Brexit referendum were known, it was alleged that those who had voted to leave the European Union had either been duped or were a lot of uninformed and prejudiced ignoramuses, bigots, and racists to boot, and that therefore their votes did not really count at all. Only the votes of the pure in spirit really counted.

Now, as it happens, I am not altogether enthusiastic about plebiscitary democracy, and had my doubts about the wisdom of deciding such a matter as Brexit on the basis of 50 percent plus 1 of the votes cast in a single referendum, irrespective of the proportion of the eligible electorate who actually voted in it. But to object to the procedure only after the results, and not before, displays a disturbingly dictatorial frame of mind, to say nothing of a singular lack of honor: You can have any result you like, so long as it is the one we want.

There is now a tradition in Europe of holding referenda and ignoring the results. This is to get the worst of all possible worlds; and while this manner of proceeding makes clear to large parts of the population that its opinion counts for nothing, the political class wonders why it is so mistrusted and even despised.

When the death penalty was abolished in Britain, it was against the wishes of at least 90 percent of the population of the time. However, it was accepted without demur because Parliament had voted it, and members of Parliament were understood to be not simply mouthpieces for their constituents on every question. They were elected leaders who would sometimes find it necessary and have the courage to take unpopular decisions. Constitutional propriety made an unpopular decision legitimate and therefore not a matter for open conflict.

Had Parliament held a referendum on the subject of capital punishment and then disregarded the result, there would have been discontent or worse. Opponents of Brexit are looking for ways of overturning the referendum result, for it is certainly true that, constitutionally, Parliament is not bound by its results. But if the result is disregarded, it will send a clear message to the 52 percent who voted for Brexit that their opinion, even when solicited, counted for nothing, and that they could be brushed aside as if they were mildly irritating insects. Without a referendum, none of this would have happened. Mr. Cameron has proved himself to be what I always thought he was: a ruthless incompetent.

In a larger sense, the 52 percent feel the disdain of their opponents in a way that they do not generally reciprocate, irrespective of whether or not the result of the referendum is respected in the end. For the noisier members of the 48 percent, at least, supporters of Brexit are not merely persons of a different opinion, but bad persons, ex officio insular, small-minded, bigoted, xenophobic, and racist.

It would be useless to deny that some of them are as depicted. Such people exist, unfortunately, and they were obviously likely to vote for Brexit. But it is an elementary error of logic to say that because bigots voted for Brexit, people who voted for Brexit were bigots. Yet this error of logic was one that many persons of superior education, or at any of a more prolonged period of formal instruction, made.