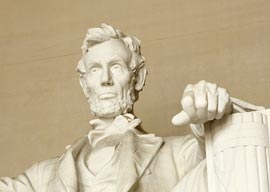 Unless you were living under a rock last week (or unless you have, you know, a life), you surely heard about Donald Trump’s whirlwind anti-illegal-immigration campaign stop in L.A. on Friday. Trump was in town to give a talk to the “secret” Hollywood conservative group Friends of Abe, founded by actor Gary Sinise and consisting of about 1,800 members, including such well-known names as Clint Eastwood, Kelsey Grammer, Jon Voight, Patricia Heaton, and legendary movie and TV producer Jerry Bruckheimer. And Scott Baio. Don”t forget Scott Baio.

I”ve written about Friends of Abe before, because for five years I was a member and co-organizer. I wouldn”t have touched upon the subject again had the group not been featured so prominently last week on every network newscast and in every Hollywood trade paper and major newspaper. The reason for the exposure was a “leak” in the normally airtight Friends of Abe secrecy machine that alerted the press to Trump’s speech to the exceptionally reclusive Abes. I have been asked by several members of the media if I can identify the source of the leak, given my familiarity with the group, and my only answer is that the most likely culprit is a vulgar megalomaniac with an insatiable desire for publicity and grotesquely bad hair. Realizing that this could also be a description of me, I”ll add “and billions of dollars and a hot wife.”

In other words, I”m fairly certain that the source of the leak was also its main beneficiary.

“Trump has taken a group of domesticated, pussified former carnivores who”ve been force-fed lentils and tofu for two decades, and he’s reintroduced the taste of raw meat.”

In the face of the unprecedented media attention, the shadow-averse groundhogs at FOA rallied around Trump, giving him a full house and even paying extra to ensure total security at the event by renting out every common area at the Luxe Hotel on Sunset, rather than just the usual banquet room. Putting the hotel on lockdown was apparently seen as a necessary measure to avoid “rapist immigrants” lingering in the lobby or bar (in five years, I never once asked Gary Sinise if he’s afraid of being raped by immigrants. Weird how that never came up…).

What no one in the media knows, however, is that last fall, the Abes also hosted Rand Paul. And, in an unprecedented Friends of Abe moment, every single Friend of Abe A-lister skipped the event, as if in protest. In 10 years, that had never happened at a banquet, let alone one featuring a sitting U.S. senator and likely presidential candidate (Paul had not yet declared last September).

Why did the Abes embrace Trump (a man who everyone knows, deep down inside, is not a serious candidate) while turning their backs on Paul (a serious candidate, love him or hate him)? My sources inside Friends of Abe told me that Paul was “boycotted” because of his perceived foreign-policy weaknesses, specifically a (perceived) reluctance to turn Muslim terrorists into drone-immolated shish kebabs, and a (perceived) lack of enthusiasm regarding Israel and the U.S. role in defending the Jewish state.

At solidly neocon Friends of Abe, that’s a no-go.

Trump, on the other hand, is working overtime to bring back a GOP that fearlessly caters to the “angry white male” demographic, as I told The Guardian on Friday. Anybody old enough to remember the Lee Atwater days in which issues like affirmative action and concerns about black street crime led to victory after victory will see the wisdom in The Donald’s thinking. It did work back then, and it worked like a charm last week with the Abes. Don”t think that any of it has to do with Trump as a person. Many GOPs still understand that the man is a clown, and his promise to stay in the race for the long haul is as unreliable as it is laughable. But Trump has taken a group of domesticated, pussified former carnivores who”ve been force-fed lentils and tofu for two decades, and he’s reintroduced the taste of raw meat.

And the GOP is liking it.

Think about it. Twenty-five years ago the GOP was unafraid to make badass black man Willie Horton the poster boy for why Dukakis needed to be dumped into Boston Harbor. Republicans (for the most part) not only gave up on those types of racial “dog whistle” tactics, but they allowed them to be flipped. A good example was in 2010, when Democrats made their poster niÃ±a a crying illegal-immigrant housekeeper who complained about being “oppressed” by California GOP gubernatorial candidate Meg Whitman. Republicans using a nonentity-of-color to spook angry white voters had been replaced by Democrats using a nonentity-of-color to make gelded white voters feel guilty. “Willie Horton’s gonna murder you in your sleep; vote Bush” had given way to “Meess Meg, she hurted mi feelings; vote Yerry Brown.”