Refuge from the Refugees 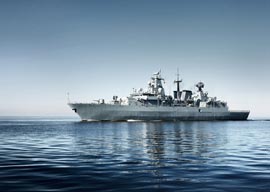 A woman friend once told me that the secret of being a bitch is to tell the truth in the nastiest possible way. In Fleet Street a succession of women journalists have been paid to be complete bitches, because male and especially female readers enjoy it. It’s probably a mildly sado-masochistic sex game. One female TV reviewer, but I forget who, had the by-line The Bitch on the Box. Julie Burchill was very good at it in the 1980s. Before her, for my mother’s generation, Linda Lee Potter in The Daily Mail and Jean Rook in the Express did the job. Jean Rook was the original of Private Eye‘s Glenda Slagg.

If they are right-wing it’s all the more fun. Left-wing and bitchy simply don’t go. In America it’s Ann Coulter and now in England someone called Katie Hopkins writes for the Sun.

On Saturday she published an article in the Sun on why Italy and the EU should not accept boat people from Libya. It understandably caused a huge stir, which was its purpose. Even a contrarian like I could not forbear to raise an eyebrow. She certainly told the truth in the nastiest possible way.

“Katie Hopkins, unlike her critics, is offering a proposal to save the refugees’ lives.”

NO, I don”t care. Show me pictures of coffins, show me bodies floating in water, play violins and show me skinny people looking sad. I still don”t care…

Make no mistake, these migrants are like cockroaches. They might look a bit “Bob Geldof’s Ethiopia circa 1984″, but they are built to survive a nuclear bomb. They are survivors…

It’s time to get Australian. Bring on the gunships, force migrants back to their shores and burn the boats.

It’s worth noting that she compared refugees to cockroaches in terms of how hard it is to get rid of them, rather than in respect of any other qualities that cockroaches have, and she wants gunboats to deter them not to shoot their boats down and drown them. She intended people to misunderstand her, however, and people wanted very much to misunderstand her and did so.

So everyone was happy. Perhaps the narrow area of what is acceptable discourse about immigration has been broadened but that remains to be seen.

Then 700 poor refugees were reported drowned when a boat they were traveling on sank.

The admirable Ed West in the Spectator, who disapproved of Miss Hopkin’s ‘dehumanising’ remarks, makes the point that I should like to make. I could not put it better.

There are just two policies that would stop people drowning: open borders, with assistance from EU navies, or automatically returning all illegal migrants to their homeland. (For example, no one drowns trying to reach Singapore, because there is no point “ you just get sent back.)

This is the point. The only point.

Ed West aptly quotes an excellent recent piece in the Spectator by James Bartholomew about the purpose of hatred for the Daily Mail and UKIP.

It’s noticeable how often virtue signalling consists of saying you hate things. It is camouflage. The emphasis on hate distracts from the fact you are really saying how good you are. If you were frank and said, “I care about the environment more than most people do” or “I care about the poor more than others”, your vanity and self-aggrandisement would be obvious, as it is with Whole Foods. Anger and outrage disguise your boastfulness.

Hating Margaret Thatcher and the Sun performed a similar function in the 1980s, as older readers will recall.