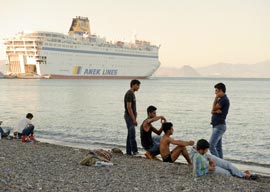 There were only a few refugees still on the seafront when I arrived in Bodrum (Turkey), and there were even fewer of them by the time I left a number of days later. Where and how they had all gone I do not know. The Greek island of Kos, only two and a half miles away, had apparently been similarly cleared of many of the refugees who had landed there.

Normality has returned to Bodrum: That is to say, the contest was resumed for the soul of the local inhabitants between the muezzin and rock music, often audible at the same time (I hope neither wins). The volume and length of the muezzin’s call certainly seems to have increased of late years, either from renewed confidence or from desperation. At any rate, I saw no signs of religious fervor in response to his loud and long call.

The refugee crisis has confirmed one of the only real laws of political science, namely that fine words butter no parsnips. Openhandedness and moral exultation have been quickly replaced by recrimination, border controls, and barbed-wire fences. The categorical imperative has met particular circumstances, and it is the latter which, as ever, have proved the more compelling. The German authorities say that they are going quickly to sort the wheat from the chaff, that is to say the true asylum seekers from the mere economic migrants, to which I can only say that I wish them luck.

“If a man preferred to stay in Rotherham rather than beg to be repatriated, his life must really have been in danger and he was a true refugee.”

Toward the end of my medical career I had quite a lot to do, one way and another, with asylum seekers, although they were then a steady trickle rather than a flood. I had often to examine them medically and try to estimate the truth or otherwise of their story. This was by no means easy, for it required the kind of detailed knowledge of their home countries (of which there were many) that I did not have. Consistency was not much of a criterion, for to achieve it a liar had only to have a good memory and an understanding of what kind of thing would arouse the sympathy of his interlocutor. Nor did inconsistency prove entire falsehood: After all, very few people can give utterly consistent accounts of themselves.

There was a sudden influx of Congolese into our city, when there had never been any before. On the whole I liked them. The hospital’s Director of Diversity (there is no social phenomenon without its bureaucratic opportunity) sent round a circular to the effect that we should be aware that the Congolese were Muslims who spoke Arabic. Even if I had not myself been to the Congo a couple of times, once crossing it by what went for public transport in good old Marshal Mobutu Sese Seko’s days, I should have known from my stamp-collecting phase of boyhood and general knowledge that this was not so. However, in these multicultural times, it is fair to assume that no one, and certainly no Director of Diversity, has any interest in, let alone knowledge of, remote countries or other cultures.

The asylum seekers from the Congo were pleased to meet someone who knew a little of their country, for to settle in a strange land where no one has an imaginative grasp of or a real interest in your homeland must be agonizing. Sometimes I could check their stories”for example, a husband killed in a political riot”on the Internet, though usually all I could do was check that a riot had taken place as described and guess whether the asylum seeker was sophisticated enough to have looked up the story and appropriated it as her own. Usually, but by no means always, I had the impression that I was being told the truth; and where the story was true, it must have been likewise agonizing to be always suspected of lying.

In those days there were few Syrians. In fact, the only Syrian asylum seeker I met was a man who had already been granted it. He said that he had been in the Syrian army, where his job was that of torturer; unfortunately for him, his work was not up to scratch, so to speak, and he went from being a producer of torture to a consumer of it. But what really ruined his life, and made it impossible for him to work ever again, was not torturing or being tortured, but the whiplash injury he sustained when someone went into the back of his Mercedes in England at about five miles an hour. Our tort system therefore did him far more damage than all the torture that he had inflicted or suffered: For in countries where there is no possibility of compensation for chronic whiplash injury, the condition itself does not exist. If you pay people to suffer, they will suffer.