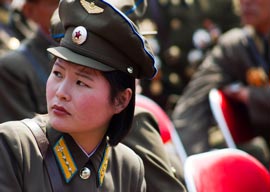 In Pyongyang I once nearly marched past the Great Leader himself (Kim Il Sung), but the British delegation to the World Festival of Youth and Students, into which I had managed to insinuate myself, decided at the last moment that I was not quite martial enough in my bearing for the immense honor of doing so. Besides, at age 40, I could hardly claim still to be either a youth or a student.

The march-past took place in the largest stadium in the world, which holds 150,000 people. The North Korean regime is one not so much of bread and circuses as of guns (or missiles and bombs) and circuses. Even the circuses are not quite the circuses as understood by the Romans, which at least aroused the spontaneous enthusiasm of the populace. In Pyongyang, the enthusiasm was, and is, compulsory; in North Korea, spontaneity has been abolished in favor of permanent political choreography.

The endless ceremonies in the stadium and in the broad but almost deserted boulevards of the city (where, as the Marquis de Custine put it with reference to St. Petersburg in his great book Russia in 1839, “a crowd would be a revolution”) take months to rehearse. Hundreds of thousands of people, including children, spend nights on end, extending into the small hours, to produce orgies of coordinated kitsch in which not so much as a hair of a head is out of place. As Custine also said, tyrannies demand immense efforts to bring forth trifles”one of the differences between the tsarist autocracy and the totalitarian dictatorship being the complete absence of aesthetic judgment and taste of the latter.

“In North Korea, spontaneity has been abolished in favor of permanent political choreography.”

The underlying purpose of these ceremonies is not to celebrate but to humiliate, to grind people to dust and force them to acknowledge their own enslavement with simulated joy. Spontaneity is not the only thing abolished; sincerity follows into the dustbin of history.

It is said that the great Romanian dictator Nicolae Ceausescu was so impressed by the North Korean ceremonies supposedly in his honor that he introduced them to his native land, which, to its great credit, proved to be too anarchical to put them fully into practice. In North Korea they were (and are) sinister as well as ridiculous; in Romania they were only ridiculous. But Ceausescu, the Danube of Thought, was precisely the kind of man to be flattered by the sight of hundreds of thousands of people in Northeast Asia waving Romanian flags and holding up portraits of himself, attributing this not to the power of the state to organize such a thing but to the genuine affection and admiration in which he and his lovely wife were held by the North Korean people.

Having been to North Korea, I regarded it as the ne plus ultra of contemporary political deformity. Landing in the Soviet Union (by North Korean airline) afterward, I felt I breathed free again. In those days, Islamism was”at least as far as I was concerned”hardly even a tiny speck on the horizon. I should have known better from my experience in hospital that when it comes to the forms of self-evident stupidity and self-destruction, man’s inventiveness is infinite. I should have remembered those lines of Gerard Manley Hopkins: “No worst, there is none.”

Every day I used to go to my hospital thinking, “I”ve heard everything,” but I never had. “They can”t surprise me anymore,” I said to myself, but they could, and they did. People who in all other respects seemed deeply unimaginative managed to devise entirely new means to make their own lives and those of the people about them unutterably miserable. The Russian writer V.G. Korolenko (a watered-down Chekhov) once said that man is born for happiness as a bird for flight, which seems to me now about as true as that earthworms are made for ice hockey. I don”t believe in Freud’s death instinct exactly, but many people do seem to have a genius both for misery itself and for the creation of misery in others. Time and again I saw people with no “objective” reasons for unhappiness, but who, with a determination worthy of a better object, pursued courses of action that would obviously lead to disaster, and that they knew would lead to disaster. The fact is that disaster is dramatic and never dull, which happiness can appear to be. We can without difficulty imagine a thousand hells, but even a single heaven escapes our imagination. Seventy-two virgins would pall after a time (whether it is heaven for them also seems not to be very often discussed).