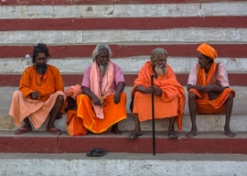 Countless articles about how unscientifically racist old WASPs were begin by quoting the scene early in The Great Gatsby in which Daisy’s oafish husband, Tom, recommends a book called The Rise of the Colored Empires.

Ironically, F. Scott Fitzgerald was parodying his own regrettable views on race. For instance, in 1921 the great novelist wrote to critic Edmund Wilson of his disgust engendered by a visit to Europe in language that sounds like Tom Buchanan waxing poetic: “The negroid streak creeps northward to defile the Nordic race. Already the Italians have the souls of blackamoors.”

Since about the stock market crash of 1929, this kind of thinking has been terribly out of fashion.

Since then, an endless stream of anthropologists have assured us that race is just a social construct, that ancient peoples made pots not war, that Aryan conquests in India and Europe were Nazi delusions, that the caste system was imposed on the egalitarian Indians by British colonialists, and many other agreeable suppositions.

As Fitzgerald’s friend Hemingway ended The Sun Also Rises, “Isn’t it pretty to think so?”

But now the brilliant Harvard geneticist David Reich has published a bombshell scientific book, Who We Are and How We Got Here: Ancient DNA and the New Science of the Human Past, whose revelations would have been found congenial by a smarter version of Buchanan (such as Fitzgerald himself).

Writing now, I shudder to think of Watson, or of Wade, or their forebears, behind my shoulder.

Evidently, Reich has…issues. But a close reader of his book can enjoy his prodigious research without taking terribly seriously Reich’s prejudices.

“Unlike in the days of barbaric nomads, we now have territorial states with internationally recognized borders.”

Reich learned the fascinating modern science of high-tech grave robbing from Svante Pääbo. This Swedish biologist invented the techniques for extracting from ancient skeletons their DNA. (Interestingly, the 1990 Native American Graves Protection and Repatriation Act makes it hard to get hold of ancient American Indian skeletons, but other races’ ancestors appear to be fair game.)

Reich applied to Pääbo’s breakthrough the traditional American knack for vast industrial scale. Assisted by English code-cracker Nick Patterson’s innovations in extracting meaning from bits and pieces of ancient genomes, Reich’s factory-like lab at the Broad Institute has been churning out a tsunami of papers on fascinating questions of prehistory.

For example, India played a large role in the development of European conceptions of race. In 1786 British judge William Jones delivered a lecture in Calcutta suggesting that Sanskrit, Greek, and Latin were all descended from the same lost language, a ghost tongue now called Proto-Indo-European.

Jones went on to hypothesize that an ancient invasion of Dravidian-speaking India by Proto-Indo-European-speaking Aryans from Iran could help explain the curious distribution of language, skin color, and caste within the Hindu world today.

To the Nazis and others, the distribution of the Indo-European language family, linking Europe to India…, spoke of an ancient conquest moving out of an ancestral homeland, displacing and subjugating the peoples of the conquered territories, an event they wished to emulate.

Since 1945, the notion of Aryan invaders has been unsurprisingly unpopular.

In Europe, anthropologists have promoted the “pots not people” theory to argue that trade and changes in fashion must explain why Corded Ware pots suddenly showed up all over Europe about 4,900 years ago. (So did battle axes; indeed, early scientists called this the Battle Axe Culture. But that sounded too awesome. Hence, more recent academics renamed it after its pottery style to make these brutal barbarians sound dweebier and thus less interesting to boys.)

In India, the notion of Hindu culture as a giant conspiracy by Aryan invaders to enshrine their descendants at the top of the social order for the rest of eternity perhaps struck a little too close to home.

But Reich’s laboratory has found that the old Robert E. Howard version is actually pretty much what happened. Conan the Barbarian-like warriors with their horse-drawn wagons came charging off the Eurasian steppe and overran much of Europe and India. Reich laments:

The genetic data have provided what might seem like uncomfortable support for some of these ideas—suggesting that a single, genetically coherent group was responsible for spreading many Indo-European languages.

Much more acceptable to Indian intellectuals than the idea that ancient conquerors from the Russian or Kazakhstani steppe took over the upper reaches of Indian culture has been the theory of Nicholas B. Dirks, the Franz Boas Professor of History and Anthropology at Columbia, that the British malignantly transformed diverse local Indian customs into the suffocating system of caste that we know today.

Now, though, Reich’s genetic evidence shows that caste has controlled who married whom in India for thousands of years:

Rather than inventions of colonialism as Dirks suggested, long-term endogamy as embodied in India today in the institution of caste has been overwhelmingly important for millennia.

This is in harmony with economic historian Gregory Clark’s recent discovery in his book of surname analysis, The Son Also Rises (Clark loves Hemingway puns), that economic mobility across the generations is not only lower than expected in most of the world, but it is virtually nonexistent in India.

Just as you’d imagine, Reich found that the highly nationalist Chinese turn out to be genetically quite homogeneous, while the Indians are genetically diverse due to caste divvying them up into thousands of inbreeding groups:

The Han Chinese are truly a large population. They have been mixing freely for thousands of years. In contrast, there are few if any Indian groups that are demographically very large, and the degree of genetic differentiation among Indian jati groups living side by side in the same village is typically two to three times higher than the genetic differentiation between northern and southern Europeans. The truth is that India is composed of a large number of small populations.

Indians traditionally thought of India less as a nation than as a world. Modern Indian nationalism’s roots trace to Gandhi’s sojourn in South Africa, where his thinking was revolutionized by the simplistic racial politics of the African colony in which his countrymen were seen not as countless castes, but as, in contrast to Europeans, blacks, and Coloureds, simply Indians.

Reich worries that his genetic findings sound more like the racialist ideas of a century ago than what educated people are supposed to believe in the current year. So, he’s come up with a number of explanations for why the bad guys whom Tom Buchanan read were wrong after all:

But the data also reveal that these early discussions were misguided in supposing purity of ancestry….

You see, the Yamnaya steppe nomads who were the predecessors of the Aryans who invaded India were actually a hybrid of two even more ancient peoples: a northern steppe race and a southern race from Armenia or Iran.

The Aryan-invasion-theory glass isn’t half full, Reich wants you to understand, it’s half empty.

Reich points out that genetic research proves that race is not just an arbitrary social construct (although he’d much prefer you call it “ancestry” rather than “race”). For instance, the Caucasian race, which was first named by German scientists in the late 18th century, turns out to be a real thing, genetically speaking:

Today, the peoples of West Eurasia—the vast region spanning Europe, the Near East, and much of central Asia—are genetically highly similar. The physical similarity of West Eurasian populations was recognized in the eighteenth century by scholars who classified the people of West Eurasia as “Caucasoids” to differentiate them from East Asian “Mongoloids,” sub-Saharan African “Negroids,” and “Australoids” of Australia and New Guinea…. [P]opulations within West Eurasia are typically around seven times more similar to one another than West Eurasians are to East Asians. When frequencies of mutations are plotted on a map, West Eurasia appears homogeneous, from the Atlantic façade of Europe to the steppes of central Asia. There is a sharp gradient of change in central Asia before another region of homogeneity is reached in East Asia….

But, Reich hastens to point out, today’s vast Caucasian race has only existed in its current form for the 4,500 years since steppe herdsmen invaded.

Before the Bronze Age there were several quite distinct races in Europe. After the last Ice Age, Europe was inhabited by an ancient race of hunter-gatherers with blue eyes and dark skin. They were then largely overwhelmed by lighter-skinned, brown-haired farmers from the Middle East.

These farmers in turn were inundated, especially in northern Europe, by the blond beast pastoralists from the steppes.

Nietzsche would have found much of Reich’s book validating. And Tom Buchanan would have seen in Reich’s discovery that Europe, while relatively homogeneous, is mostly steppe ancestry in the north and more Levantine in the south with a transition zone in the middle a restating of the Nordic, Alpine, and Mediterranean categories of his era.