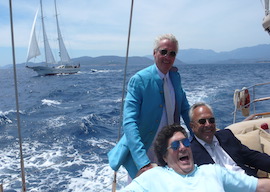 He was a Falstaff in his drinking and in celebrating life, but his greatness lay in his friendships. Like his closest friend Nick Scott, who left us three years ago, he roamed the world making friends and being as generous to them as a fairy godfather. The years, with all their disappointments, teach us caution, but Tim Hoare remained reckless to the end. This is High Life about him fifteen years ago: “We hit a hurricane while sailing off the Riviera last week, a hurricane called Tim Hoare. I have never in my long life met anyone quite like him. The words, in posh English vintage 1940s tones, tumble out so fast, enwrapped in alliteration and so clogged with onomatopoeia, that a poor little Greek boy like me misses three out of every four.” On that particular trip, Tim’s private plane blew an engine in mid-flight and was turning uncontrollably in circles. He was alone with the two pilots. So he rang us but failed to tell us he was in trouble. He just said he might be a while. He spent only one night on Bushido, and presented me with the grandest and most beautiful old Cartier lighter, which has stood proudly on a mantelpiece ever since. It is half a foot high and was made in the ’20s.

A friend described him as Falstaffian in girth and height, with a booming voice—also assured and confident, generous to a fault, extremely intelligent and well-read, and atop it all possessing an abundant shock of jet-black hair. He and Bob Geldof were like brothers and made a very strange couple: the rich old Etonian clubman, the proud and extremely talented Irishman playing the poor Irish lad scrounging a living. Nick Scott was the third musketeer.

“Toward the end he expressed love to all his friends and thanked them for a life of happiness.”

Now it looks as if things are coming to an end, like an Agatha Christie novel, but without the mystery of who’s next. Three of us in the merry band of Pugs are in our 80s, but fear of the man in the white suit is not the problem. Missing those who have recently left us is. Tim never lost touch with the overflowing joy and curiosity of the young. And like the young, he remained confident of the future despite the degradation of our culture. Toward the end he expressed love to all his friends and thanked them for a life of happiness. Whatever sorrow he may have felt for his untimely upcoming death he kept to himself. That is what courage is all about.

His wife Ginny and his five children from three marriages handed us “Whale Tales,” a collection written by friends about him that is unique in the variety of life he led: Sailing against Roger Taylor, Bob Miller, and myself, and going straight through a nature reserve where no boats were allowed in order to snatch victory. Always at the start of a race heading for Africa in his beautiful square-rigged Alexa, but somehow making it back almost on time before the finish gun. Chartering the most expensive sailing boat ever in order to beat Bob Miller in Capri, and after confidently giving himself the worst handicap ever, being unable to move an inch as if a giant spike had been attached through his deck to the Italian seabed (he did almost lose his temper that time). Gallivanting all over Turkey in a fantastic old Edwardian steamer, and somehow losing Fergie overboard, then finding her, Fergie emerging from the seas squealing, “Soopah!” Flying to New York with his partner Richard Northcott to close a $100 million film deal, losing patience with the squabbling, and appointing Roger and Alan to represent Richard and him and going for a very liquid lunch. The trouble being no Roger or Alan was in the room, yet Richard Northcott thought Tim to be the best corporate thinker ever.

Richard gave a wonderful lunch in the pub he owns near his house and that of Tim, the beautiful 18th-century Hollycombe House. Ginny and the five children were in the front row, but what impressed me was the attendance. All of his friends were there on a day’s notice. Prince Pavlos of Greece, with wife and daughter, flew over from New York, roughing it in the air as Dorian raged over the Atlantic. Ditto Roger Taylor and Bob Geldof. Arki Busson left the Bahamas, dropped 200 meters by a Dorian whim, but made it to London and to the church on time. Prince Nikolaos of Greece came over from Athens, and so it went with people flying in from all parts of Europe. After a wonderful speech by the reverend Nicoll about Christ and continuity of friendship and the life eternal, my spirits rose. I sat with Geldof and Taylor and the Bismarcks and the Cowdrays and David Linley and Mark Getty and Nick Scott’s older brother Anthony. Here is Harry Hoare speaking to us about his father: He had spotted some scars on Tim’s stomach as a little boy and asked about them. Tim said they were from a fight with a lion. It then became a fight with a leopard. Once grown up he realized they were stretch marks. Oh, well. What I love about Britain is that a funeral is a celebration of the dead, not an occasion to look sad and depressed and to spill tears. In Germany, Italy, and Greece, telling a funny story is seen as an insult to the departed. The best send-off ever for the most generous and wonderful of men.