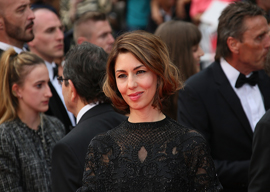 I hate Hollywood. To me, the entertainment industry ranks right up there with rectal cancer on the list of the worst things in the world. And no, not because the biz is a CIA MKUltra Illuminati front (or however that theory goes), but rather because Hollywood attracts truly horrible people. The worst people I know are in the business (sadly, so are the most attractive women), so nothing makes me happier than watching Hollywood leftists browbeat each other bloody.

Last week, mediocre filmmaker and nepotism poster child Sofia Coppola found herself the target of a band of angry SJWs (yes, I realize “angry SJW” is redundant) with way too much time on their hands (again, redundant). Coppola is currently promoting her newest film, an adaptation of Thomas Cullinan’s 1966 novel The Beguiled. In Coppola’s version, the book’s two black characters, a slave girl and a mixed-race woman passing as white to avoid slavery, have been excised. The race hustlers claim that by eliminating the book’s only two black characters, Coppola has committed the sin of “whitewashing.” In an essay published by IndieWire, Coppola explained that she”d never been comfortable with the fact that Cullinan, a white author, had “given voice” to black slaves, so she heroically removed the characters to right a racial wrong. See what she did there? “I removed the black characters because whites shouldn”t write about blacks, so in a way, I”m the hero.” Clever, clever move; play one SJW fetish (“Hollywood needs more black characters”) against another (“whites cannot be entrusted to tell “our” stories”). I haven”t seen a wop so effectively bamboozle an adversary since Michael Corleone took on Senator Geary.

As if on cue, another group of diversity vultures began attacking Game of Thrones showrunners David Benioff and D.B. Weiss because their next project for HBO will apparently involve black characters that are slaves. “How dare white men write dialogue for black slaves,” the SJWs cried (for the record, some of these are the same activists who just a week earlier protested Coppola for not retaining slave characters written by a white man). Official Certified Luckiest Man Alive John Boyega, the dull-featured black hero of the new Star Wars films, threw gasoline on the fire by attacking Game of Thrones for not having any characters of color (except that it, like, totally does). Responding to the outrage, HBO assured a nervous world that there would indeed be black producers on Benioff and Weiss” upcoming show (whew!).

“Nothing makes me happier than watching Hollywood leftists browbeat each other bloody.”

These two consecutive controversies shared the same basic theme: In the world of creative writing, can a person of one race write characters of another? And if they can, should they? It’s not a new debate…in fact, it reaches back to long before people were using terms like “SJW” or “white privilege.” The recent controversies took me back to 1994, and my introduction to Hollywood’s favorite “white” black writer.

It was September 1994, and I was a featured speaker at the Institute for Historical Review’s international Holocaust revisionist conference. My speech was scheduled to close out the festivities on the final day. The night before, while holding court at the bar of the hotel where the event was taking place (which in retrospect strikes me as odd, as I never drank back then), I was approached by a portly young gentleman who introduced himself as David Mills of The Washington Post. I was quite familiar with his work, and a huge fan. His 1989 interview with anti-Jewish “rapper” Professor Griff briefly caused the group Public Enemy to disband, his 1992 interview with “Sister Souljah” led to one of Bill Clinton’s defining campaign moments, and his thorough and meticulous piece about Jews and slavery had angered both the Nation of Islam and the ADL. I told Mills that it was a pleasure to meet him. Then I began stammering, “But…I thought…I thought you were…” He took pity on me and finished my sentence. “You thought I was black. Well, I am.”

He pulled out his wallet and showed me a photo of a dark-skinned black couple. “These are my parents…and I”m not adopted.”

“Well, bugger me like an Arab’s goat,” I replied. “Ain”t that something.” I mean, the guy looked perhaps Mediterranean or faintly Hispanic. But full-on black? It was hard to believe.

We talked for several hours. He”d been sent by the Post to find something incriminating, something “Nazi,” at the conference. Instead, he found me. The next day, he showed up for my speech. As the conference adjourned, he told me that he”d soon be relocating to L.A. to write for TV. We exchanged numbers and shook hands. Once he left, I broke down laughing. I told my girlfriend that the guy was out of his mind. TV writing is an almost impossible business to break into. If he thinks he can effortlessly transition from journalism to network television in a matter of months, he’s out of his mind.

Another legendary Cole miscalculation. See, there were doings afoot. Just a few weeks after the conference, iconic TV producer and writer David Milch, of Hill Street Blues and NYPD Blue (and later, Deadwood) fame, had told students at a writing seminar that he didn”t think black writers have the same range as their white counterparts. Blacks, he asserted, are not very good at writing about anything other than the “black experience.”

Needless to say, this became a news story. And ABC, which had no desire to see the creative force behind one of its biggest hits banned from TV, told Milch in no uncertain terms, Hire a black writer immediately so we can make this shitstorm go away! The network PR department crafted a “meet cute” story about how Mills wrote Milch a long letter asking for the opportunity to prove him wrong about black writers, and Milch, remorseful over his bigoted comments, decided to give the kid a chance. But Mills, who by now had become a close friend of mine, confided in me that the real story was that ABC forced Milch’s hand. And Milch”arguably one of the finest creative minds in the business”enjoyed a wicked in-joke, so he hired the whitest black man he could find (and one whose name was practically the same as his own). David Milch mentored David Mills, and soon he began entrusting every racially themed episode of NYPD Blue to his new protÃ©gÃ© (most notably the infamous 1996 “nigger” episode).

Mills soon became the black writer with whom everyone in the biz wanted to work. NBC hired him away from ABC because the network wanted a writer with a “black sensibility” to contribute to its hit series ER (Mills” ER scripts overflowed with stereotypical black characters, like a magical black street preacher and a ghetto kid who’s a secret genius). Mills also became executive producer of The Corner, the all-black HBO miniseries about the West Baltimore drug trade. Mills knew he was being pigeonholed as the “nigger episode” guy, but the money was just too good. Not that he totally lost his love of nonfiction. In summer “95, he accompanied me to a dinner with Jared Taylor and the IHR’s Mark Weber. Mills, much like Taylor, was still most at home when discussing, and debating, issues of race, and the two gents had a back-and-forth of biblical proportions that night.