Remembrance of Black American Fugitives Past 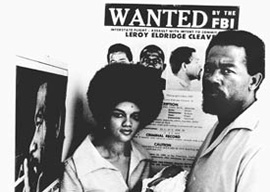 Hearing about the black American fugitive who was caught recently after 40 years on the lam brought back lots of memories. No, I’m not black and I’ve never been a fugitive from justice, but the memories are quite pleasant because I met all those Black Liberation Army conmen in Algeria just about the time George Wright flew in from Boston to join them.

It was pre-PC but worse. I remember one night at the Sherry Netherland in New York in the company of an exquisite beauty, a lady who had the lead part in that haunting film Summer of ’42, which had just been released. I was back from Vietnam and after lots of drinks I thought my chances were pretty good, especially as she asked if I would walk her across Central Park. Back then the park was a more dangerous place than Da Nang. Alas, the Nam came up while walking and I mentioned enlisted men’s fragging of officers. “It’s one hundred percent black GIs who do it,” I said. If I had called her mother a hooker she would not have gotten as angry. After calling me a racist mother———g pig, she rushed off into the night and I never saw her again.

Jennifer’s reaction might seem over-the-top now—especially as she hardly knew where Vietnam was—but it was predictable. Black gangsterism was beautiful back then, and to hell with firebombing buildings, murdering judges and policemen, and robbing banks in the name of revolution. Some revolution. When Angela Davis was finally apprehended, Newsweek gushed about her looks as if she were Helen of Troy rather than a rather rough-looking gap-toothed woman with an extreme hairstyle.

“Algiers was grim, with veiled women, no booze, and security police everywhere.”

White liberal guilt remained out of control until Tom Wolfe’s famous piece that exposed the hypocrisy of Park Avenue types such as Leonard Bernstein and his infamous penthouse party for the Black Panthers. Once Eldridge Cleaver and his merry men escaped the prison that was America for the freedom of Algeria, Bill Buckley thought it a good idea I go to that hellhole and interview them for National Review. I waited for a visa for a long time and eventually got there from neighboring Libya.

Algiers was grim, with veiled women, no booze, and security police everywhere. The French who had made it a cosmopolitan and pleasant capital had long left, with only a few old shopkeepers still trying to eke out a living. I hung out for a week without being able to make contact until I met a black South African revolutionary named Futhi Muchatini. Once I heard his nickname (“Futhi give me fifty,” given to him by Arnaud de Borchgrave) I knew I would soon be making contact.

Algerian strongman General Boumediene had permitted all sorts of revolutionaries to establish offices in Algiers, but he kept a tight leash on them. When Futhi took me to the Black Liberation Army headquarters I remember thinking that it beat Alcatraz, but not by much. The dumpy little house on the edge of town doubled as living quarters and offices. The only decorations were revolutionary slogans hastily scribbled on the walls. I quickly began spreading the wealth, and both Cleaver and his “field marshal,” Donald Cox, became talkative. “Oh man, what wouldn’t I give for a hamburger” was the field marshal’s opening line. It was the usual diet of anti-American slogans, nothing I hadn’t heard from American liberals back home: Amerika was a prison, the pigs were fascist thugs, the whole system was rigged against the blacks, and so on.

But Cleaver eschewed all that and only asked for news. To my amazement, they had not read a newspaper in months, did not speak French or Arabic, and hence were completely cut off from the rest of the world. I seriously contemplated telling him that a black-v.-white civil war had broken out but then thought better of it. I already was feeling sorry for the guy, especially when he showed me pictures of his beautiful wife Kathleen Cleaver. (I also thought of asking him for her number, but a self-preservation instinct prevailed.)

I got a cover story from it, the black revolutionaries got bored and asked permission to return to America and face the music, and George Wright went on to Paris and Portugal for 40 years of freedom until the long arm of the law got him. I hope he rots in prison because he murdered a WWII Bronze Star winner in cold blood and then wrapped himself up in the flag of revolution along with other criminals such as Cox and Cleaver. The latter served his time and later sold trousers with a large black sheath hanging from the front. The scheme did not work, since African-Americans have no need of such tricks. His beautiful wife left him and Jennifer O’Neill had a nervous breakdown, but not over me.