Remembrance of Yale’s Past 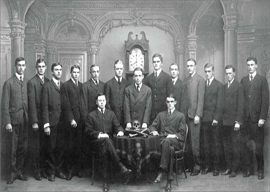 We love Yale sluts! “No” means “yes,” and “yes” means “anal”—that’s the beastly braying cry at Yale these days. The frat boys from Delta Kappa Epsilon (G. W. Bush’s club) have been accused of taunting female undergraduates in this fashion. Yale requested that the fraternity be shut down for five years.

O, how the mighty have fallen! How can such noisome behavior, base and vile, reek from this once-great flower of American academia? Indeed, lilies that fester smell far worse than weeds.

In the glory days, no man ever went to Yale to learn anything. God gave us Columbia and Harvard for that. OK, there’s Harold Bloom, but otherwise, Yale was intended for unadulterated gentlemanly pleasure and sport. As Wilde said, “If a man is a gentleman, he knows quite enough.” Is there anyone around who remembers when Yale was the most splendid, elegant, and gentlemanly of Ivy League colleges; when Andover and St. Paul’s sent their best and brightest to New Haven; when, as Fitzgerald wrote, “Taft and Hotchkiss…prepared the wealth of the Middle West for social success at Yale”?

Where are the Yale men who had their soft tweed jackets and their Oxford-gray flannel trousers made at J. Press and Arthur M. Rosenberg; who trod the Memorial Quadrangle shod in the Raywood-model, full brogue, slip-on Peal shoe and the Oxford-cloth, rolling, button-down-collar Brooks Brothers shirt?

“How can such noisome behavior, base and vile, reek from this once-great flower of American academia?”

And what’s happened to the tables down at Mory’s, which the 21 Club wished it looked like? And whither the Fence Club, the swellest undergraduate sodality, where Huggins, the club permittee, the white-jacketed Negro gentleman’s gentleman, brooded over his boys with warm breast and, ah, bright wings? Ralph Lauren would have made a mess of himself had he seen such authentic WASP class and décor: stuffed leather chairs, polished mahogany tables, Turkish carpets, and framed pictures of Y-sweatered Eli captains sitting on the Yale Fence.

O, where is the Yale of Skull and Bones, when it was the world’s most prestigious college underground secret society? Admittedly, it always had a meritocratic, hence slightly middle-class, tinge. The fifteen senior “knights” might include such campus big shots as a team captain and the editor of the Yale Daily News, but its graduate patriarchs became presidents, ambassadors, and, most important of all, partners in Brown Brothers Harriman. And where are the modern equivalents of Donald Ogden Stewart, Gerald Murphy, and Brendan Gill, who represented the lefty, artistic wing of the brotherhood—yet gentlemen all?

O, where is the Yale of Bones’ chief rival, Scroll and Key, whose brothers deferentially referred to themselves publicly as second in fame to Bones, knowing full well privately that they were, in fact, the snottiest of senior societies? Like the Order of the Garter, which Lord Melbourne coveted “because there was no damn merit in it,” Scroll and Key preferred aristocratic and moneyed birth over brash achievement. O, where are the likes of Jock Whitney and Paul Mellon, both cringingly shy, and Scroll and Key visions of the beau ideal? And who remembers when Scroll and Key’s idea of an arty-farty brother was the composer of “Eli Yale! Bulldog! Bulldog!” the über-sophisticate, Cole Porter?