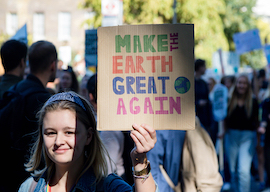 Man is the only creature, as far as we know, that enjoys the contemplation of its own disappearance from the face of the earth. We find the prospect of our annihilation by disease, famine, war, asteroid, or climate change deeply satisfying. We feel, somehow, that we deserve it and that the world would be a better planet without us.

When to this strange source of satisfaction is conjoined a license to behave badly in the name of salvation from earthly perdition, we can expect a mass movement that approaches insanity. So it is with the Extinction Rebellion, whose fanatical members have brought chaos to London recently by blocking streets, occupying crossroads, gluing themselves to public buildings and railings, and standing atop underground trains, to the fury of thousands of rush-hour commuters who don’t want to save the world but only get to work.

In order to try to understand their state of mind, I recently read a book by three psychologists, Leon Festinger, Henry W. Riecken, and Stanley Schachter, first published in 1956, called When Prophecy Fails. It recounts the reaction of a small doomsday sect in America founded by a housewife, who believed that most of North America was soon to be inundated by a great flood. When this failed to happen on the predicted date, members did not immediately conclude that the absurd grounds upon which their belief was based were false, but became even more convinced of their truth. When there is a contradiction between what we want to be the case and what is the case, our desire to believe often triumphs, at least for a time.

The beginning of the book gives a brief and selective history of sects that have predicted Man’s total annihilation in the near future, among them that of the Millerites in the 1840s in the United States. Reading the account of this sect, I could not help but think of the Extinction Rebellion that is now gripping London, to the growing fury of the rest of the population.

“The Millerites wept because the earth was not destroyed.”

The Millerites were followers of William Miller, a farmer from New England who predicted Christ’s advent and the end of the world sometime in 1843 or 1844. “I was…brought,” wrote Miller, “…to the solemn conclusion [by his close studies of the Bible in 1818] that in about twenty-five years from that time all the affairs of our present state would be wound up.”

When the end of the world, much to their disappointment, failed to occur, the Millerites extended the deadline for it, as it were, and “the brethren who had assumed the responsibility of sounding the alarm entered into their work with renewed energy and outdid themselves to terrify the army of unbelievers into a realization of the horrors that awaited them and to strengthen the faith of those already in the ranks…. [The] failure [of the prediction] seemed to excite even greater exhibitions of loyalty to the expectation of the impending Judgment Day.”

Millerite meetings became rowdy: “[They] were now so crowded that they were no longer orderly as they had been. If there had been a time when an undesirable element could be kept out, it was now impossible to do so; and a matter of fact the world was so near its end…whatever precautions were taken before seemed hardly worthwhile any longer.”

The Millerite journal, called The Midnight Cry, exhorted a kind of repentance:

Think for eternity! Thousands may be lulled to sleep by hearing your actions say: “This world is worth my whole energies. The world to come is a vain shadow.” O, reverse this practical sermon, instantly! Break loose from the world as much as possible…. Let your actions preach in the clearest tones: “The Time is short!” “This world passeth away”….

The Midnight Cry reported that “many are leaving all to go out and warn the brethren and the world.” Alas, the end of the world failed to materialize and a believer wrote, “Is all this but a cunningly devised fable? Is there no reality to our fondest hope and expectation of these things?” The Millerites wept because the earth was not destroyed.

Imagine little Greta Thunberg’s disappointment, and that of her acolytes, when she and they find that human life has not died out as advertised and their hysterical protestations of stolen childhoods and blasted dreams seem merely ludicrous!

But the Extinction Rebellion in London has at least performed one useful service, namely revealed to us once again how easily mob violence may be incited.

Some of the “rebels” climbed onto the roofs of underground railway carriages, unfurled banners, and prevented the departure of the trains. They were as convinced as any Millerite of the importance of their message: Repent lest ye perish! What was a delayed train to set against the imminent end of the world? It seemed to have escaped their notice that they were attacking a mode of transport that was environmentally the least expensive.

Anyway, the commuters did not agree with them. For a time, the “rebels,” looking the epitome of self-satisfaction, maintained their pose, but then one of them was pulled off the roof of a carriage by an angry commuter to the cheers of the others. Then some of the passengers set upon him and would have done him serious harm if not restrained by more levelheaded brethren.

The fury against the “rebels” was occasioned by the ten-minute delay for which they were responsible. The platform was very crowded, and if I had been held up in this manner, I too would have been furious. But a ten-minute delay, albeit of several hundred people, is not, on the scale of world-historical wrongs, very great; and yet it was almost the occasion of serious mob violence.

Little Greta Thunberg, whose face I must confess I do not find generally very expressive of a deep love for humanity (but I might be wrong, for there’s no art to find the mind’s construction in the face), suggested that the Extinction “rebels” defy the police for the sake of humanity. In other words, she was inciting violence.