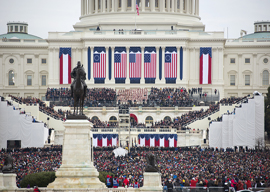 President Trump, every Republican senator, and the GOP majority in Speaker Paul Ryan’s House just put the future of their party on the line.

By enacting the largest tax cut since the Reagan administration, the heart of which is cutting the corporate rate from 35 to 21 percent, Republicans have boldly bet the farm.

They have rewritten America’s tax code to reflect their belief that cutting taxes on the private sector will produce the prosperity they have promised. If it happens, the GOP will reap the rewards, if not by 2018, then in 2020.

Democrats, as the Party of Government, egalitarian and neo-socialist, have come to see their role as redistributing wealth from those who have too much—to those who have too little. For, as men (and women) are born unequal in ambition, ability, talent, energy, personality and drive, free markets must inevitably produce an inequality of results.

The mission of Democrats is to reduce those inequalities. And as the very rich are also the very few, in a one-man, one-vote democracy the Democratic Party will always have a following.

Winston Churchill called this the philosophy of failure and the gospel of envy.

“The problem for Democrats is that Reaganomics worked, and is seen historically to have been successful.”

Republicans see themselves as the party of free enterprise, of the private not the public sector. They believe that alleviating the burden of regulation and taxation on business will unleash that sector, growing the economy and producing broader prosperity.

By how they voted Wednesday, Republicans yet believe in “supply-side” economics. In the early ‘80s, this was derided as “voodoo economics” and “trickle-down” economics, and pungently disparaged by John Kenneth Galbraith as an economic philosophy rooted in the belief that, if you wish to feed the sparrows, you must first feed the horses.

The problem for Democrats is that Reaganomics worked, and is seen historically to have been successful. In 1984, growth was near 6 percent and Reagan rode to a 49-state landslide over Fritz Mondale who, at his San Francisco convention, had declared he would raise taxes.

Thus the importance of what happened Tuesday and Wednesday on Capitol Hill should not be underestimated.

On their legislative agenda, Republicans broke out of a slump. Though they got not a single Democratic vote in either chamber, they showed they can govern alone. On the lead item on the GOP-Trump agenda—taxes—they delivered. They shifted policy dramatically toward Republican philosophy. They wagered their future on their convictions. And the splenetic rage among Democrat elites suggests that they know they have suffered a defeat difficult to reverse.

Moreover, though the bill that came out of Congress is unpopular, the nation will not vote on Trumpian management of the economy until November 2018, after the early returns from the tax cut have come in.

And the Democratic Party has also been put into a tight box.

As Democrats have denounced the tax bill for exploding the debt by $1.5 trillion, how do they propose to pay for all the free stuff, including free tuition and infrastructure, that they will have on offer?