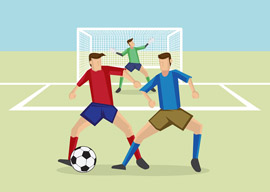 I care nothing for football (soccer to Americans), but I was pleased when Portugal won the European Cup last Sunday. I would have preferred it to be Liechtenstein or San Marino, or best of all Vatican City”that is to say, the smallest country possible. But at least Portugal is not a large country, however important it may once have been in world history.

Naturally, as a patriotic Englishman, I was thoroughly delighted when Iceland defeated England. Everyone likes an underdog in any case, and anything that humiliates, crushes mentally, and causes misery to the beer-bellied, shaven-headed, and tattooed English football supporters is obviously a blow for civilization. If there are more unattractive people in the world than these supporters I do not know them, and I am better-traveled than most. If we but lived in a sensible world, such people would be on sight automatically denied entry into all foreign countries. But we do not live in a sensible world, where this obviously wise precaution would be taken.

Sport has long brought out the worst in crowds, of course, especially among those whose lives require constant spectacles to disguise their lack of a deeper source of satisfaction in life. I remember once reading (a long time ago) a brilliant book by a professor of classics, Alan Cameron, titled Circus Factions: Blues and Greens at Rome and Byzantium. He was not a man to mince his words: Of the work on the circus factions by a fellow scholar, he wrote that it was such “a spectacular marriage of traditional falsehood with original fantasy” that it was “beyond the reach of ordinary criticism.”

“If human folly has remained much the same over two millennia, then one finds it easier to accept it just as it is.”

There were two main factions of supporters at the games in Rome and Byzantium, the Blues and the Greens. Before Professor Cameron published his book, scholars believed”under Marxist influence or on the somewhat optimistic assumption that people are not willing to kill or be killed for no good reason”that these two factions, whose clashes often caused many deaths and much destruction, must really have been expressing some deep social antagonism. The Blues were therefore believed to have represented the rich and the Greens the poor, but Professor Cameron demolishes that supposition with what seems to me something very much like finality.

In a riot in AD 561, for example, the Greens attacked the Blues, who had first occupied some of the Greens” supposed home territory and then chanted (in Greek, of course):

Not a Green anywhere.

The Greens retaliated by stoning the Blues and chanting:

Not a Blue in sight.

This suggests that human nastiness and idiocy with sport as the pretext of its expression is no new phenomenon.

Those scholars who believed that the rivalry between the Blues and Greens had a deeper political, social, or economic meaning claimed that the entire population of Rome or Byzantium supported either the Blue or Green faction, but in fact what might be called the “hard-core” supporters (and rioters) were relatively few, the only source with exact numbers giving 1,500 for the Greens and 900 for the Blues in the year AD 602. As the recent events during the European Cup in France have reminded us, such numbers of vandals and hooligans are perfectly capable of bringing chaos to a large city.

Who, reading Pliny’s letter that is quoted by Professor Cameron, could fail to think of present-day football culture?

It amazes me that thousands and thousands of grown men should be like children, wanting to look over and over again at horses running and men standing on chariots. If it were the speed of the horses or the skill of the drivers that attracted them, there would be some sense in it”but in fact it is simply the colour. That is what they support and what fascinates them. Suppose half way through the race the drivers were to change their colours, then the supporters” backing would change too and in a second they would abandon the drivers and horses whose names they shout as they recognize them from afar. Such is the power of a single worthless shirt.