Reshuffling the Deck in Egypt 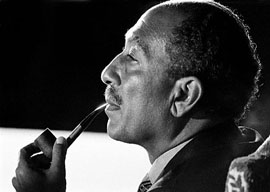 (On October 6, 1981, Fabrice Moussus was the only cameraman who remained on his feet to film Egyptian President Anwar Sadat’s assassination and, thus, Vice President Hosni Mubarak’s elevation to the presidency. These are his recollections of that day and what it meant to Egypt. Moussus was a staff cameraman for ABC News in Cairo, Frankfurt, and Paris for thirty years.)

On October 6th, 1981, Hosni Mubarak could have died. Instead he became president. He remained president for the next thirty years. In the Egypt of antiquity, thirty years was time enough to build pyramids. What is Mubarak’s legacy? He kept the peace with Israel, but that is of little concern to the average Egyptians who felt their lives devoid of hope. The Muslim Brotherhood has capitalized on the social classes who feel discontent with their daily life’s poverty and corruption. Indirectly, the Muslim Brotherhood brought Mubarak into power.

Roll back the calendar to that day in October 1981:

President Anwar El Sadat arrived with Hosni Mubarak, his chosen vice president, at a parade commemorating the Egyptian Army’s crossing of the Suez Canal in the 1973 war against Israel. Sadat wanted to show that despite the mounting opposition, he was firmly in control.

When French Mirage fighter jets flew low overhead with color smoke trails behind them, everyone, including Sadat, was staring at the sky. That was precisely when the attackers chose to strike. A perfect film scenario. I was there filming for the American television network ABC News when, to my left, I heard a crackling noise. My initial reaction was that blanks were being fired as part of a display, just as I had witnessed during other parades in the Egyptian desert. In the next hundredth of a second, as my head and camera panned left, I knew exactly what it was. A truck had stopped. Two soldiers were firing their Kalashnikov rifles from the truck bed. Another soldier stepped down and launched hand grenades at the podium.

“In the Egypt of antiquity, thirty years was time enough to build pyramids. What is Mubarak’s legacy?”

With the camera still running, I quickly decided that the gunmen were too busy shooting in front of them to stop and shoot to their side. That would have left them vulnerable to Sadat’s bodyguards, who were returning fire. I ran parallel to the guards, filming the gunmen advancing toward the reviewing stand spraying bullets in front of them. I heard grenades explode amid the the fleeing crowd’s screams.

As I arrived at the reviewing stand, I found myself facing a gunman not five meters away. We made eye contact. He pointed his rifle at me. There was a meter-high wall between us, and I ducked behind it. I let the camera roll, propping it on my shoulder while covering my head with it. I thought, “At least the camera is thick enough; it might ricochet the bullets away from my head.” The tape ran for six seconds, an eternity. Nothing seemed to happen, so I stood up and saw the gunman fleeing. Behind me, Sadat’s personal photographer was lying on the stairs, now dead.