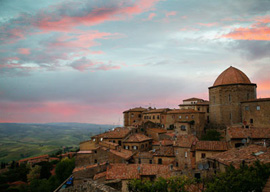 They tell me that I”m “living the dream” because I live in Italy. Well, yes, Italy is quite a country and as I sink my remaining teeth into yet another bruschetta al tartufo at only 10 euros a pop, I do think, “Sod the teeth, this is the life.”

But there is a catch. Italy, tragically, is riddled with Italians. And Tuscany is even worse because lurking behind every oleander bush is an Englishman with a Panama hat on his head and a glass of Chianti in his hand. In every piazza is a sun-dried American woman of a certain age in a hurry to find an answer to her question, “Yes, but is it organic?”

I live in the small city of ForlÃ¬, in the Romagna which adjoins Tuscany and is like Tuscany before it became Chiantishire. So apart from a few English teachers at the university and two American men whose source of income is unclear, I am the only Anglo-Saxon in town unless you count professional basketball players.

Living here is no dream. It is like serving a life sentence inside an Italian restaurant. There is no escape. I work with Italians. I used to socialize with them, but I gave up booze six months ago and cannot face them sober. I”m even married to an Italian. She is much younger than me and is beautiful and sÃ¬, sÃ¬, certo, I do love her. But there’s no getting away from it: She is a bloody Italian as well.

All you need to know about Italians is that they are all either communists, fascists, or Catholics”whatever they call themselves”who indignantly blame the other two factions for their country’s spectacular corruption and stultifying bureaucracy. My wife Carla is a Catholic. That’s preferable, obviously, to a communist and also, if push came to shove, to a fascist.

Carla’s mission (God bless her or perhaps God help her) is to get me to become a Catholic because otherwise there is no chance of me going to heaven because only Catholics go to heaven and time is running out because the apocalypse is due any day now, as we can so clearly see from what is going in Syria, and not forgetting Iran, but also those really weird tornados in America. And in those very few moments of life as we know it left to us on Earth she feels “only half a person” being married to a non-Catholic, which also jeopardizes her own place in heaven.

We were married in a Catholic Church where I, who was baptized and confirmed an Anglican, had to swear to God that I”d bring our children up as Catholics. Fine, I thought. At least I don”t have to swear to bring them up as Italians. There are five of them now, aged eight down to four months. I speak to them in English but they do not take a blind bit of notice.

I would not mind being a Catholic in some ways because the Catholic Church is about the only institution left in the civilized world that defends the Christian values that gave us not only the free market but freedom.