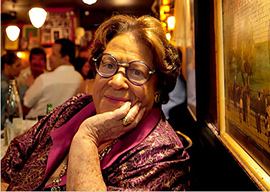 The death of anyone well known – especially in New York – invokes more clichÃ©s than you know what draws flies in summer. Every obituary I read about Elaine included the words, “icon”, “brassy”, “landmark”, “true New Yorker”, and other such epithets. Let’s take it from the top. I was among the original clients of Elaine’s, having been taken there by Clay Felker, the great magazine editor who discovered such small timers as Tom Wolfe, Leslie Stahl, Chris Buckley, and even poor little me.

As clichÃ©s are verboten, here are a few vignettes through the forty odd years I knew her. One time, when I was in my late thirties, she and I finished up the last two in her joint. Elaine used to mix her perfumes and managed to always smell wonderfully. Sure, she was over three hundred pounds, but when one is dead drunk and can’t see, one’s olfactory nerves work overtime. I suggested to her we go back to her place. “Go home, kid,” she whispered in my ear. I misunderstood and took it for a yes. “I’m gonna slug you,” was the next sentence. I finally took the hint. The next night, at Elaine’s, yet again in my cups, I regaled everyone about the rejection. Once informed as to what I was saying, she became all sweetness and charm. In fact she never once swore at me ever again.

“Elaine used to mix her perfumes and managed to always smell wonderfully.”

That one felt totally safe in her presence was a given. I once ran into a man in the lavatory – probably the smallest and least hygienic toilet in the city – whom I thought resembled the Saudi ambassador to Washington, a towel-head who went by the name of Prince Bandar. As I loathe ruling Saudis, a bunch of camel drivers who call themselves princes, I looked at the man in the face and asked him if he was selling any good drugs. He looked back at me but said nothing. So I went back to the table and told Elaine about it. “Nice going,” she said, “except that’s Julio Rodriguez, head of the city’s detectives.” As the sleuth was going by she said, “Hey Julio, this is my friend Taki.” It’s been a beautiful friendship between the G-man and yours truly ever since.

Mind you, she also had a bad side. Like when she took down my picture from her walls – I was between Jay McInerney and Hunter Thompson – for no good reason. When I screamed bloody murder, she went straight to the point. “You don’t spend money in here the way you used to.” “Why is Hunter still up? He’s dead and never paid anyway,” said poor little me. I got a withering look in return, one that told me something I already knew. Hunter Thompson was a much better writer and star than the poor little Greek boy. Rest in peace, dear Elaine, every broken down hack in Noo Yawk will sure miss you.