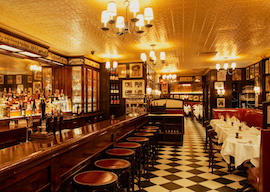 A busy ten days—nights, rather—with some heroic drinking thrown in for good measure. Hangovers discriminate against the old nowadays, but no one is doing anything about it, not in Washington, not in New York, not in London. The old chairman of The Spectator, Algy Cluff, had a dinner party at a gentlemen’s club, featuring an extremely funny speech by him, which started me off boozing—and it didn’t let up. One drinks to augment an enjoyable evening, never to relieve boredom. One also drinks when one can’t hear, as in extremely noisy New York restaurants.

I made a big mistake recently when I had Prince and Princess Pavlos of Greece, and Michael and Victoria Wolff for dinner at Avra, a Greek restaurant on the Upper East Side that I thought might be a quiet tavern à la below the Acropolis back home. The place turned out to be larger than Grand Central and noisier than when Krupp’s Big Bertha was firing off shells against the Allies. When my wife rang for the reservation, they had taken my name down and assured me that the best table would be available for little ole “me and my important guests.” Great, I thought, they must have heard of me, and prepared in my mind the questions I had for Michael Wolff, whose book on Trump was a runaway best-seller. Nothing could have been further from the truth. It was an old Bagel trick, making people feel important in order to sock ’em with the bill. I didn’t mind because the food, wines, and service were excellent, but I couldn’t hear a word Michael and the prince were saying, so I chose to go nonstop liquid.

Funny how the Bagel is crawling with restaurants, but a good intimate place to eat is hard to find. Minetta Tavern, owned by my old buddy Keith McNally, a Brit, is such a place, but it’s far downtown and the traffic is horrific. Robin Birley, however, is opening a place uptown and that should solve my dining problems. Minetta Tavern, in the Meatpacking District, was a hangout for Papa Hemingway when he was slumming downtown. Ezra Pound and e.e. cummings used to join him and reminisce about the old days in Paris. Papa would be appalled with downtown today. The place is full of tourists looking to make a statement, dressed in the contrived dishevelment they think is cool. Back in Hem’s time, downtown was reserved for real hustlers, real druggies, and real artists. The place was ruined when people from Vogue moved in.

“Back in Hem’s time, downtown was reserved for real hustlers, real druggies, and real artists.”

Yep, the place changes at a dizzying pace, which makes any existing literary spot all the more precious. Norman Mailer used to go downtown to smoke pot and get into a fight. Woody Allen went down in order to play the clarinet, but I don’t know if he still does after les girls went after him. Allen is a great filmmaker but had the bad luck to get involved with Mia Farrow, who became a Medea-like avenger after having been dropped by him. Her ghastly son Ronan continues in her tradition of ruining men’s lives on very dubious charges. The latest casualty in the girls-going-after-boys war is a billionaire money manager, Kenneth Fisher, who said that wooing a wealthy client is like wooing a woman at a bar. Well, it is, one puts their best foot forward, although I’ve never wooed a client, but have wooed lotsa women in bars. Close to $3 billion have fled his company because he dared say that. Big investors are running from him faster than the Kuwaiti ruling family ran from Saddam’s tanks. Probably quicker than the Saudi rulers would flee if, say, the Americans or Israelis looked away while an Iranian contingent landed in the sands.

Otherwise everything’s hunky-dory, and I have a bit of advice for les girls: Let justice take its course with Harvey Weinstein, instead of attacking him when he quietly sits with a friend at a restaurant. An “actress” spotted Harv and went into a lengthy and loud spiel about rape. Her name made all the papers the next day, plus the news on TV. But Harvey is still innocent in the eyes of you-know-who. Girls, girls, wait for the verdict. The man you should be going after is the king of Siam, King Maha, who has four beautiful wives—his last one is a former flight attendant—but who dismissed a consort, Sineenat, for overt ambition and acting like a queen. I like the king because unlike most kings nowadays he has about 30 billion big ones and lives most of his life in Germany with women who like him for many reasons. He also designates women as consorts, not to be confused with wives and other such female titles. Thai women are among the most beautiful creatures on earth, and the last time I was there, 47 or so years ago, I fell for a waitress who brought me breakfast at the Dusi Thani Hotel. I was on my way to the Nam and swore to her I’d be back to get her and take her west with me. It never happened and by now she must be a very old lady and I’m sort of set in my ways. Reading about the king’s consorts brought back memories. I should have made her my consort, but I was young and stupid back then. Girls, go after King Maha, Harvey has spent all his moola on lawyers.