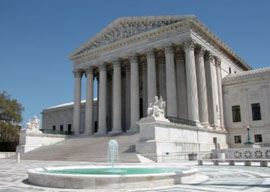 When the Obama administration decided that it had no interest in preventing the movement of undocumented aliens from Mexico into the southwest United States, the State of Arizona decided to take matters into its own hands. Based on a novel theory of constitutional law, namely, that if a state is unhappy with the manner in which federal law is being enforced or not being enforced, it can step into the shoes of the feds and enforce federal law as it wishes the feds would, it enacted legislation to accomplish that.

The legislation created two conflicts that rose to the national stage. The first is whether any government may morally and legally interfere with freedom of association based on the birthplace of the person with whom one chooses to associate. The second is whether the states can enforce federal law in a manner different from that of the feds.

Regrettably, in addressing all of this earlier in the week, the Supreme Court overlooked the natural and fundamental freedom to associate. It is a natural right because it stems from the better nature of our humanity, and it is a fundamental right because it is protected from governmental interference by the Constitution itself. Freedom of association means that without force or fraud you may freely choose to be in the presence of whomever you please, and the government cannot force you to associate with someone with whom you have chosen not to associate, and the government cannot bar anyone with whom you wish to associate from associating with you.

“He now has demonstrated that he will not faithfully enforce federal law as the Constitution requires. He will only enforce the laws he agrees with.”

Without even addressing the now-taken-for-granted federal curtailment of the right to associate with someone born in a foreign country and whose presence is inconsistent with arbitrary federal document requirements and quotas, the Supreme Court earlier this week struck down three of the four challenged parts of the Arizona statute, which attempted to supplant the federal regulation of freedom of association with its own version. It did so because the Constitution specifically gives to Congress the authority to regulate immigration, and Congress, by excluding all other law-writing bodies in the U.S. from enacting laws on immigration, has pre-empted the field.

The court specifically invalidated the heart and soul of this misguided Arizona law by ruling definitively that in the area of immigration, the states cannot stand in the shoes of the feds just because they disapprove of the manner in which the feds are or are not enforcing federal law. The remedy for one’s disapproval of the manner of federal law enforcement is to elect a different president or Congress; it is not to tinker with the Constitution.