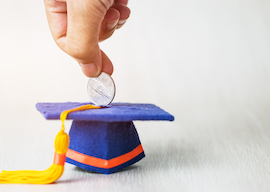 Although American higher education has been terribly dumbed down since the late 1960s, it still has considerable practical value. College graduates earn more money, enjoy better health, and are less likely to get divorced than those who don’t have such degrees. Plus, their children fare better in these areas than the children of people who don’t get a college education. The credential isn’t necessary to financial success and being able to afford a family, but it’s the surest path to each.

So, it continues to be widely believed that everyone should go to college. And of course, academia itself has no objection to the idea. With the government providing grants to needy students and subsidizing student loans, colleges and universities have raised tuitions at exorbitant rates. But while they have reaped enormous profits, the average student in the class of 2016 has $37,172 in student loan debt. Student loan debt is the nation’s second-highest consumer debt category—trailing only mortgage debt—and is much higher than both credit card debt and auto loans debt.

Student loan debt is the only type of debt that can’t be got rid of by filing for bankruptcy. Getting a bachelor’s degree in sociology or environmental studies can result in a young person trying to climb out of a financial hole for decades while earning wages that lead him to question the prudence of having “followed his passion.”

There are other problems with higher education, reflecting the poor quality of our K–12 education system. In National Affairs, Chester E. Finn Jr. describes the situation well:

Although there’s much talk of school standards designed to yield graduates who are “college and career ready,” the grim fact remains that, in recent years, 96% of colleges enrolled students who required remediation, and over 200 schools placed more than half of their incoming students in at least one remedial course. In Maryland, more than one third of community-college matriculants need remediation in reading and writing, and two-thirds need remediation in math.

[T]he completion rate for bachelor’s degrees within eight years of entry has long hovered below 40%—almost precisely where the National Assessment of Educational Progress places the extent of “college readiness” in reading among 12th graders. Yet the matriculation rate—the share of those graduating from high school who head straight into some sort of college—is about 70%. It’s scarcely surprising that so many of them need remediation—and that so few make it to graduation. Simply raising the matriculation rate closer to 100% will only exacerbate this problem.

“Human beings are heterogeneous, so our approach to college education should comprehend that.”

These figures suggest that universal college education is simply not tenable. It’s not surprising, given its central importance, that so many people want everyone to go to college. The trouble is that people have very different interests and abilities, and those differences would persist even if students were better prepared for college.

To be sure, there are other explanations for why college doesn’t work for many people than sheer ineptitude or lack of interest. The same social problems that beset the K–12 education system—illegitimacy, single-parent families, lack of personal responsibility and of other virtuous habits—hinder success in college as well. But independent of these environmental and personal deficiencies, there never was any reason to believe everyone should go to college, as if it were necessary for the common good or the national interest. Human beings are heterogeneous, so our approach to college education should comprehend that.

Besides, like the silly belief that a tenured professor must make an “original contribution to scholarship,” universal higher education debases standards and destroys vital intellectual and artistic traditions. Instead of excellence, we get mediocrity, which in many cases resents that which is superior to it. It would be better to have no notion of Milton at all than to think the poet is “problematic” because of some stupid, trendy -ism.

There has been much talk of late about the improved economy, but as ever, it is mostly the middle and upper classes that have gained. Meanwhile, the workforce-participation rate is just 62.9%, close to a forty-year low. The workforce-participation rate of prime-age men is especially dire. Among high school dropouts aged 25 and older, fewer than half are in the labor force.

So, what should be done?

Although the trades are commonly regarded with contempt by white-collar types, more young people and their families should view them as equally legitimate as the college degree route. High schools can provide students with considerable vocational training in just a few years, although subsequent training will be necessary in certain fields. As it is, many students don’t get vocational training until they’ve entered community college or a technical college. That is a waste of time and money. Needless to say, high schools should stop acting as if all or most students need to go to college, but rather present the trades as honorable and dignified career options—not alternatives, but options.

There are certain policy measures that could aid this emphasis on the value of learning a trade. Abby M. McCloskey observes:

Properly supporting workers…requires education reform. Our main form of higher-education grants—Pell Grants—can go only to individuals without a bachelor’s degree and apply only to programs over 600 hours. They cannot be used for training and vocational programs, and so provide little assistance to mid-career professionals who lose their jobs and seek retraining. At a minimum, Pell funding should be applicable to vocational and apprenticeship opportunities outside of a traditional four-year college degree and be made available to those of any previous educational level, as proposed by the Trump administration’s Council of Economic Advisers. Additional reforms could be implemented to change the incentives around the grant and encourage positive labor-market outcomes, such as stacking the grants to encourage graduation (since nearly half of recipients drop out of their programs) or allowing more generous grants to students who attend programs with demonstrated employment and wage effects.

It is crucial that students learn not only carpentry, plumbing, and the like, but also receive training in newer fields like the allied health professions, cybersecurity, and information technology. Provided he lives within his means, there is no reason a person with a job in any of these fields cannot live a respectable life. Nor will he have to go into vast debt just to be able to do so.

Certainly many men are better suited for this career path, academia and the white-collar office alike being emasculated, soulless places. In contrast, the ordinary carpenter is not all smiles and “nice to meet you.” Neither does he have any good team members to touch base with. The man can just do his job, without degrading himself and others with some vulgar charade.

This more realistic approach to education is related to the immigration issue in a significant way. Alarmingly, President Trump said recently that we need more legal immigrants to support the growing economy. It is doubtful that he really believes that; most likely, he’s just trying to attract some support from the opposition. In any case, more legal immigrants are needed only in STEM fields, where American workers, at present, are not fully supplying demand. Otherwise we don’t need more immigrants, whether legal or not.

Indeed, if Trump is serious about doing what is best for American workers, then he will do all he can to stop illegal immigration as well as most legal immigration. Here it’s important to realize that a wall at the southern border is a limited solution, because most immigrants enter the country legally. Combined with the loss of American industries, immigration has produced a surplus of low-skilled labor. In consequence, companies are not pressured to pay low-skilled workers fair wages, while workers lack motivation, though that hardly justifies dropping out of the workforce altogether, as many have done. Low-skilled immigration costs the government billions each year, especially in entitlements and health care. There are any number of better ways to spend that money, including on high school vocational training programs.

Another benefit of fewer Americans going to college would be fewer Americans imbibing the anti-American and anti-Western nonsense that now characterizes the humanities and the social sciences. “A modern university,” said Joseph Sobran, “is less the custodian of a heritage than a cauldron of fads—liberalism, feminism, multiculturalism, and so forth. Whatever isn’t ‘progressive’ must be ‘reactionary’ and therefore ineligible for tolerance.” Higher education, as the sagacious writer saw, has become a liability. The mad left-wing pabulum we hear from Cory Booker, Alexandria Ocasio-Cortez, and other Democrats comes from the academy, where such fantasies pass for common sense.

Financially exploitive, intellectually compromised, and adverse in many ways to the national interest, our colleges and universities have a lot to answer for. We can do better than teaching the young that they all need to go through the degree racket.