Return of the Blackshirts 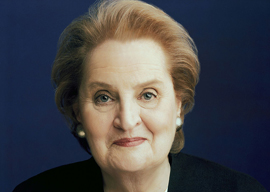 Benito lives! The Blackshirts are here. Fascism is on the march—at least according to Madeleine Albright, secretary of state under Bill Clinton and—in my book, having allowed Albanian gangsters to win power in Kosovo—the worst American foreign minister ever. She attacks Hungary and Poland, the left’s newest whipping boys, for preferring their own kind to African migrants, but she’s not alone. The usual suspects are all piling on. Fascism is back, but this time, alas, without the beautiful uniforms. Damn!

La Albright was taken to task a long time ago by Barbara Amiel for pretending she did not know she was Jewish—until Washington beckoned. “Hasn’t she ever looked in the mirror?” wrote Barbara, Lady Black, herself very proud to be Jewish. I hope I’m not picking on Albright, a typical Washington phony, obsequious to the trendy left. I just don’t like her choice of words. Fascism comes with large crowds, larger buildings, flared breeches, shiny boots, and lotsa horses on parade. And plumes, lots of plumes. I don’t see any of that, and I can’t even hear the marching bands, let alone see them. Like all lefties, this woman is full of bullshit. If fascism is on the march, I’m Bill Cosby. (That poor man has already paid 3.38 million greenbacks to the purported victim, and now faces life in jail and having to pay her millions more.)

“In America there is free speech only for those who think like the bien-pensants; the rest are all considered fascists.”

Boy, is the left trigger-happy. It takes only the wrong accent (from the American South), the wrong look (Northern European), the wrong clothes (bespoke suit), and the wrong attitude (happy), and the outrage begins to flow. And when it comes to patriotism, fuggedaboutit. (We’re all one people and other such baloney.) The fascist label also applies to those dumb types who think that bathrooms should be segregated and used by people whose gender corresponds with that on their birth certificate. To resist the bathroom trend, or bill—it will soon become law in the land of the depraved—is unutterable.

At a chic Noo Yawk restaurant the other evening, a Chinese-looking woman speaking with an American accent, whose every third—or second—word was “like,” was complaining about Texas. “I was, like, in Austin, and it was, like, the most liberal place in the state, but it was, like, terrible, a bad place, like, awful…” I was having a baklava sweet cake with my friends Michael Mailer and Bartle Bull, and should have crowned her with it, but she would have thought me, like, a fascist, so I, like, let it go.

Never mind. That young whippersnapper Macron is also worried that goose-stepping is becoming chic. “Europeans must turn away from selfish nationalism,” says the gerontophile. Xenophobia is his particular phobia. The fact that the Hungarians and the Poles have voted for a government that doesn’t dance to the E.U.’s tune sticks in his craw. What does not stick is the fact that the E.U. operates without transparency, and its officials are unelected and unaccountable. Funny that. The dictators are calling the democratically elected dictatorial.

In this upside-down scenario, the Poles and the Hungarians remain the best people in Europe, or at least the most honest where democracy is concerned. What the chic bien-pensants call liberalism had the people fooled for a while, but their game is up. A minority has gained enormous power and wealth from globalization, but the masses have been left out in the cold. The BPs—ugly, soft, greedy, well-connected, and rich, ensconced in their villas, campus houses, and guarded city apartments—have never experienced financial difficulties. They are all theory, no practice. These solipsists wouldn’t recognize a migrant if the wrong sort came into their house and mugged them. Except that he wouldn’t, because he couldn’t. Too many guards. The solipsistic bien-pensants have never experienced the direct consequences of immigration, but they write and even lecture us about it. They have never felt like strangers in their own countries, and look down their noses at those who do. They encourage the creation of “safe spaces” in schools and universities for those who enforce speech and behavior codes for those who don’t agree with them. In America there is free speech only for those who think like the bien-pensants; the rest are all considered fascists.