Return of the WASP Woody Allen 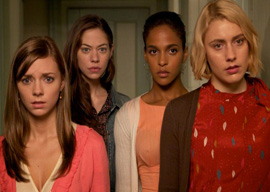 Metropolitan, the 1990 dramedy about a group of chivalrous preppies whose debutante ball after-parties are so articulate and decorous that they might have driven J. Alfred Prufrock to throw a TV out the window like Keith Moon trashing a hotel suite, earned auteur Whit Stillman the appellation “the WASP Woody Allen.”

Stillman, who wrote for The American Spectator when young, developed a cult following among some rightist intellectuals because of his out-of-the-closet political and cultural conservatism.

Even more unusual in romantic comedies is his ethnic and class loyalty. At least since The Graduate, privileged Protestant characters have been the default bad guys who always lose the girls to the spunky outsiders. But Stillman, the godson of Princeton sociologist E. Digby Baltzell, who popularized the term “WASP,” took a pedantic pride in his country-club caste’s genteel virtues. As one Upper East Side youth notes in Metropolitan:

“Stillman’s perspective is a cross between Jane Austen’s level-headed moralism and the absurdism of Lewis Carroll and Oscar Wilde.”

The term ‘bourgeois’ has almost always been one of contempt. Yet it is precisely the bourgeoisie that is responsible, well, for nearly everything good in the world for the last four centuries. Do you know the French film “The Discreet Charm of the Bourgeoisie”? When I first heard that title I thought, finally, someone is going to tell the truth about the bourgeoisie. What a disappointment.

Stillman followed up with two more movies in which People Like Us are the good guys. In Barcelona, two Reaganites joust with leftist Euro-weenies during the Cold War: “I think it’s well-known that anti-Americanism has its roots in sexual impotence….” And in the The Last Days of Disco, when Chris Eigeman’s nightclub flunky is accused of being a yuppie, he retorts: “I wish we were yuppies. Young, upwardly mobile, professional. Those are good things, not bad things.”