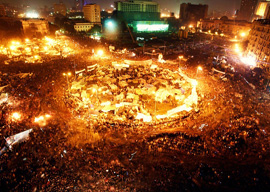 In the sequel, the monster always comes back stronger than before. After a florid incarnation of the so-called “Arab Spring,” Cairo’s inhabitants have just returned election ballots whose resulting extremist successes forebode a Nuclear Winter for liberty.

It was in Tahrir Square that earlier this year protesters against “dictatorship” made their dramatic stand for human rights, civilian dignity, and liberal democratic entitlements. Also among their demands was the privilege to gang-rape Western women.

Lest any have forgotten (great efforts were made to ensure the casual observer never knew about it in the first place), only moments after the much-lauded victory against tyranny, the “protesters” took turns manhandling CBS reporter Lara Logan. Since approximately ten seconds after this occurrence, Western audiences have only heard intermittently from this portion of the international soundstage.

“In the sequel, the monster always comes back stronger than before.”

Following Hosni Mubarak’s resignation it was not civil rights which ruled, but a military junta. Many of the same abuses endured under Mubarak were suffered under the new gaggle of bit-player military dictators. Scant media attention was paid to the additional occupations of Tahrir Square by thousands protesting the continuing abuse. Ignored were ominous signals that the extremists who had long been outlawed from political participation were on the verge of making a very big comeback.

Only in the days after the recent election did the mainstay publishing powers offer a glance back and a look forward. More than one characterized the Freedom and Justice Party (né Muslim Brotherhood) victories as an astonishing development. Many used some variation of the theme that those rascally radicals, like all good movie villains, had “played it smart” and “lay [sic] low during the revolution,” only to emerge at full force during the aftermath.

Now arrives word from multiple sources that not only did the militant Islamists pull off a feat no one expected (except everyone who was paying any attention), they went about celebrating it in much the same way as before. Sadly this is not hyperbole, merely the plodding plotline of a formulaic script.