Revenge of the Goths 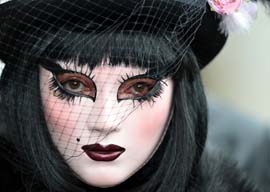 The original Goths”those rude, hairy, smelly, bloodthirsty, rampaging barbarians who crushed the Roman Empire”would by any reasonable definition of the term be properly referred to as “badasses.”

The closest modern Caucasian equivalent of the ancient Goths would be the oft-maligned white biker gangs.

But that’s not what is commonly known as a “Goth” anymore. And by “Goth” I refer not to the ancient Germanic tribes whose ultraviolence ushered in the Dark Ages, but rather an annoyingly persistent fashion trend that arose from punk-rock subcultures and simply refuses to die no matter how many times I ask it to.

Your typical modern Goth, whether male or female, wears super-ghostly makeup contrasted with dark eye shadow. They tend to worship vampires and get depressed a lot. But rather than raping and pillaging, these new Goths are more prone to weeping and swallowing pills.

The Goth lifestyle tends to appeal to bookwormy white girls and a smattering of nerdy white guys, although I”ve noticed that most Goth agglomerations will have a Token Black Goth within their fold. Sometimes they”ll even have two. But mostly just one. Or sometimes none at all. It depends. But never more than two.

“That’s how life works, you silly little vampire bats. Unless you fight back, you”re going to get bullied.”

I don”t want to dive too much into the history of the fey and weepy Goth style because I”ve never liked it. I”ve found almost all of its adherents to be vapid and annoying, and so therefore digging into all this arcana would make me uncomfortable, unhappy, and possibly even gassy. Typically, Goth is a female-leaning thing. Many of said females are quite fat. A number of others are too skinny. But with very few exceptions, one would be making a grave mistake to refer to them as “badasses.” In other words, they would be easy prey for their ancient namesakes. They are no longer natural-born bullies. Instead, the bullies pick on them.

In 2001 at age 15, Scottish schoolgirl Anna Nicole Raphael committed suicide “after being tormented over her gothic appearance” for years by classmates.

In the wake of the 2007 murder of Sophie Lancaster“described as “a Goth who had upwards of 20 piercings in her face, lip and nose and liked alternative music stars like Marilyn Manson” and was allegedly beaten to death by some local toughs for looking like a stereotypical Goth”authorities in Manchester, England adopted a policy that made it a hate crime to attack someone for belonging to “alternative subcultures.”

Just last week in Manchester, a still unidentified “yob“ allegedly shouted “Goth!” before assaulting a 13-year-old girl and dragging her to the ground. And it is being referred to as a “hate attack” rather than simply an attack.

In the ever-ballooning Persecution Management Business that keeps so many otherwise useless government workers employed, one must always expand the definition of crime in order to prolong the existence of one’s job. So now the “hate crime” umbrella has expanded not only to protect those with “innate” qualities”i.e., you can”t magically stop being black”it will now also shield and nurture misguided teens who dress like Bela Lugosi and cry themselves to sleep.

It’s when they cry to the police that makes me want to cheer their tormentors, though.

I am no stranger to being physically assaulted for the way I dress. Over a decade ago I was sucker-punched by an anti-racist skinhead “yes, you read that correctly”for wearing an iron cross pendant. I punched him back harder than he punched me. Where I come from, that’s how you respond to being attacked.

Way back in the early and mid-80s when Iron Maiden and Judas Priest ruled the American white underclass, I was a stone-cold sticking-out-like-a-sore-thumb freak dressed in greaser style and listening to Eddie Cochran and Gene Vincent. But the metalheads couldn”t distinguish between punks and rockabillies”to them, we were all New Wave Faggots. One day while I was sitting on a public bus and looking like an extra from High School Confidential, some metal kid who looked like Ozzy Osbourne spotted me the minute he got on the bus, walked straight back to me, and punched me square in the nose. We were both white, but to him I was still a tribal enemy.

Around that same time I attended a keg party mostly peopled by metalheads. They made it clear the moment my pompadour entered the room that I was not welcome. When I stood up to go to the loo, what seemed like a dozen of them”male and female”pounced on me, punching, scratching, and clawing at my hair. I was able to wriggle loose and scoot out the building before it got worse.