Reviewing the Plots Against the Clean Water/Clean Air Guy 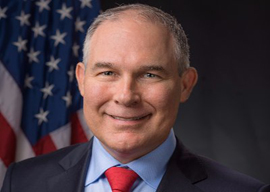 NEW YORK—At first I was just like everyone else. Why would Scott Pruitt, the head of the Environmental Protection Agency, need twelve extra highly trained SWAT-team-capable security guards and a $43,000 Maxwell Smart-style soundproof phone booth in his office?

The guy’s job is clean air and clean water, right? He’s heading the agency signed into law by Nixon after Lady Bird Johnson bitched for ten years about litter on the highways. He’s basically muscle for the garden clubs of America.

Why would the chief enforcer of stuff like the Wild and Scenic Rivers Act need to spend $1,641 on a short-hop, one-hour D.C.–to–New York flight because “security concerns” require him to be in first class at all times? (The logic here is not clear to me, since any dirty water/dirty air terrorists would presumably have to enter through the front passenger door. And if they’re especially sneaky anti-EPA undercover assassins, they would probably be wearing Chico State sweatshirts and sitting in coach. Scott needs to plant himself in row 47 or else he’ll have his back to the enemy!)

But now my eyes have been opened.

“Scott Pruitt needs a bulletproof vest, an armored limo, and three guys weighing 280 with Italian surnames surrounding him at all times.”

Intelligence documents obtained by this reporter reveal a vast network of threats, both foreign and domestic, against America’s Mr. Clean. Scott needs a bulletproof vest, an armored limo, and three guys weighing 280 with Italian surnames surrounding him at all times.

In early March, suspecting that a dinoflagellate called Pfeisteria piscicida was causing mass death among the shellcracker population of the Ashepoo River Basin in South Carolina, Pruitt flew to Charleston, chartered a private speedboat to Edisto Beach, poled upriver to Wiggins, and discovered on the south bank an armed, hostile band of Waccamaw Indians whose grievances include a belief that the shellcrackers are destroying the habitat of the gizzard shad, a species sacred to their coastal-dwelling ancestors. After a three-hour standoff, Pruitt was extracted from the situation by commandos dispatched by the expeditionary force of the 628th Air Base Wing.

In late October, while inspecting goat carcasses at the Darling International rendering plant in Fresno, California, as part of his ongoing effort to detect the pesticide Permethrin, suspected to be seeping into the earth from the nearby strawberry fields, Pruitt was mistaken for a beaver trapper by a visiting class from San Francisco’s Harvey Milk Middle School and pelted with gluten-free pastry products, many of them still contained inside My Little Pony lunch boxes.

As part of his High Efficiency Toilet Initiative, designed to preserve water in Western states, Pruitt traveled in February to the Commode Design Center in Kohler, Wisconsin, where he witnessed the demonstration of a solar-powered two-seater water closet with a double-clutch swirling-bowl trigger device that had been tested at a 28 percent liquid-preservation rate even when used by morbidly obese lumberjacks. Apparently the device had been tampered with by radical toilet traditionalists, causing a surge of pressure that ended up spraying Pruitt, ruining his $8,000 herringbone suit and dousing three EPA aides with a substance currently being tested for toxicity at the Centers for Disease Control.

Many people have questioned why Administrator Pruitt has made seventeen first-class round trips to his former home in Tulsa, Oklahoma, at taxpayer expense, but there’s a more-than-adequate explanation:

The Corynorhinus townsendii ingens, better known as the Ozark big-eared bat, native to the limestone caves of Adair County, Oklahoma, but endangered by overconsumption of a particular moth species suspected to be contaminated by arsenic, chromium, and lead contained within the coal ash of a power plant near Bokoshe.