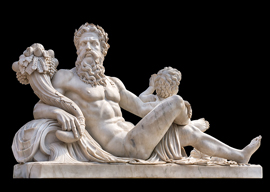 One of the more curious books of 2018 is Not All Dead White Men: Classics and Misogyny in the Digital Age by Donna Zuckerberg. She is the sister of Facebook founder Mark Zuckerberg, who is America’s leading fan of the Emperor Augustus, founder of the Roman Empire.

Dr. Donna, who has a Ph.D. in classics (the study of ancient Greece and Rome), is alarmed and angered. Exactly why is less than clear, but she’s found an amusing ostensible target: the new right’s interest in her discipline. As she wrote in her woke classics magazine Eidolon in 2016:

A specter is haunting the Internet—the specter of the “alt-right.” The forces of white supremacy and toxic masculinity, fueled by a sense of entitlement dwarfed only by their inflated estimation of their own intelligence, have entered into an unholy alliance to remove feminism, political correctness, and multiculturalism from America.

Of course, feminism, political correctness, and multiculturalism have been bad for public interest in the glory that was Greece and the grandeur that was Rome. But there has been one exception to this trend. Dr. Zuckerberg went on to note:

The Alt-Right is hungry to learn more about the ancient world. It believes that the classics are integral to education. It is utterly convinced that classical antiquity is relevant to the world we live in today, a comfort to classicists who have spent decades worrying that the field may be sliding into irrelevance in the eyes of the public.

Dr. Zuckerberg may be exaggerating, but there has been a certain growth in interest in the accomplishments of the Greek and Roman world among self-educating men.

Tom Wolfe, as usual, was ahead of his time, having the blue-collar hero of his 1998 novel A Man in Full discover in prison the Stoic philosopher Epictetus. (Wolfe was inspired by conversations with the Stoic senior POW in the Hanoi Hilton, James Stockdale.) That seemed baffling to me twenty years ago, but less so today.

Then the movies Gladiator and 300 were surprise hits. (Hollywood auteurs tend to identify with the great conquerors of the Ancient World.)

But this modest resurgence of her subject is a bad thing to Dr. Zuckerberg:

Classics, supported by the worst men on the Internet, could experience a renaissance and be propelled to a position of ultimate prestige within the humanities during the Trump administration, as it was in Nazi Germany in the 1930s. Classics made great again.

She sees this amateur interest as a threat to the emerging anti-white-male hegemony within academic classics:

No matter how white and male Classics once was, we are not that anymore.

Dr. Zuckerberg’s articles in Eidolon announcing the topic of her book were, while slightly demented, written in a feisty prose style that made for fun reading.

“Overthrowing Patriarchy in the classics turns out to be a financially doubtful career strategy (unless Mark Zuckerberg is your brother).”

Unfortunately, it appears that the chortling that her magazine has induced over the past couple of years has led her to decide she wanted her book to be taken more seriously and thus has adopted a more moderate and pedantic rhetorical tone.

Dr. Zuckerberg’s brother Mark is often denigrated as an autistic alien. But a more reasonable view of a man who has achieved a net worth of $57 billion at age 34 is that he is a natural leader of men.

Similarly, Dr. Zuckerberg seems to want to be a leader of women. At Eidolon, Dr. Zuckerberg assembled a team of female classics writers who are endlessly aggrieved by their field’s image as a redoubt for bow-tie-wearing men with leather elbow patches on their tweed jackets.

Worse, nobody except white men is interested in Greece and Rome. So overthrowing Patriarchy in the classics turns out to be a financially doubtful career strategy (unless Mark Zuckerberg is your brother).

Further, after a half century of feminism and diversity riding high in the universities, there’s not much of interest left to mine in the topics of women and nonwhites within the Greek and Roman worlds.

For example, the slender possibility that the North African Latin playwright Terence might have been black has been kicked around over the decades without new evidence one way or another emerging. This question, which was big on Usenet in the 1990s, now seems to be fading from discussion on the internet.

The role of women in the ancient world is hardly lacking in interest. Dynastic politics made some women enduringly famous, such as Cleopatra.

Still, ancient Greek culture tended to be intensely male chauvinist and thus lacking in accomplished women. For example, the only great Greek female writer whose works have come down to us was the early poetess Sappho of Lesbos (c. 630–570 BC).

Athenian democracy was particularly averse to women playing a role outside the home. One of the very few female intellectuals to be remembered from this peak of civilization is Aspasia, the girlfriend of Athens’ leading statesman, Pericles.

My best guess is that Aspasia was an individual of high merit, but it’s hard to tell which of the surviving references to her were originally intended as praise, jokes, satire, or libels. Aristophanes, for example, portrays Aspasia as a brothel-keeper who started the catastrophic Peloponnesian War. Reading about Aspasia is like reading about Ivanka Trump if one out of every one million tweets by celebrities had been randomly preserved.

Another problem with Not All Dead White Men is that being a member of the Coalition of the Margins, even when your brother is the richest man of his generation, means that you can’t write anything reflecting skepticism of your allies, such as gay men.

One of the more interesting questions about the ancient world is the relationship between its male chauvinism and its high degree of male homosexual activity.

Keeping women sequestered in Athens contributed to keeping basically heterosexual males from being distracted by feminine beauty, with similar results to that seen in a prison or an English boarding school.

Chauvinistic cultures that emphasize male beauty tend to be high-achieving in the arts, which has been pointed out for a long time. For example, in Raymond Chandler’s 1953 novel The Long Goodbye, the drunken writer Raymond Wade complains to private eye Philip Marlowe that all the literary critics are gay. But then he stops to admit that homosexuals tend to proliferate at historic peaks of culture:

And especially in all the great ages of art. Athens, Rome, the Renaissance, the Elizabethan Age, the Romantic Movement in France—loaded with them. Queers all over the place

For example, the greatest classicist of the 18th century, J.J. Winckelman, who more or less invented art history and introduced the idea that Greek sculpture was better than Roman sculpture, was apparently murdered by some rough trade.

(On the other hand, modern Afghanistan has similar ideas about keeping women wrapped up and comparable rates of boy-bothering, but no Platos or Aristotles.)

Right-wing movements have hardly been devoid of homoeroticism—the alt-right, with its gay Nazi bodybuilder jokes, being no exception. But Dr. Zuckerberg can’t afford to admit that, so she focuses on the strenuously heterosexual Roosh and Roissy.

Hence, the pickings are frustratingly slim for feminist classicists. Not surprisingly, their writing therefore tends toward complaining about the men of Greece and Rome.

But there’s no shortage of that kind of content regarding our own time. And there’s not much reason to become interested in an ancient culture outside of admiration for its great figures. So turning the classics into yet another branch of Grievance Studies is not exactly galvanizing.

For instance, it’s not clear exactly why Dr. Zuckerberg decided to acquire a doctorate in classics, because the subject matter these days seems to leave her somewhat peeved.

On the other hand, her brother Mark’s obsession with Rome has a clear focus: He vastly admires the empire-building of Augustus Caesar, even to the point of naming his infant daughter “August.” Mark reflected in a New Yorker profile:

Basically, through a really harsh approach, [Augustus] established two hundred years of world peace. What are the trade-offs in that?

One possibility is that Dr. Zuckerberg’s apparent disenchantment with her field of study is related to sibling rivalry with her Dead White Men-idolizing brother. No doubt she loves her brother, but still, it’s easy to imagine how Mark Zuckerberg could get on your nerves.

If so, this would be another example of that constructive Jewish tendency to redirect family resentments outward toward gentiles. If your brother Mark’s obsession with a Roman emperor is driving you crazy, don’t take it out on him. Instead, channel your rage toward outsiders seen as potentially bad for the Jews.