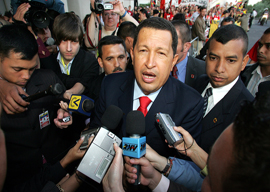 There is compulsory entertainment almost everywhere these days, even in public lavatories. It shadows you like a secret policeman. I would dislike this even if I had not reached the age when urination required some concentration for successful accomplishment or completion; rock music while I try only adds to my difficulties.

In airports, television screens now relay news constantly (another genre of entertainment), with or without stock market prices or football results moving in a ceaseless band across the bottom of the screen. There is no sound, or it is at so low a volume that it cannot be heard. You can neither watch such screens nor disregard them entirely; it is as if your eyes suffered from severe ambivalence. If I were dictator of the world, I would ban them.

Still, very occasionally you learn something from them. Last week I was flying to Brazil, by coincidence on the very day the former president Mr. Lula was to go to prison. The screen showed him making his last speech to his supporters before he went; he was drunk at the time, but his gestures were entirely those of a demagogue.

“Resentment is the nourishing broth in which demagogues like Castro and Chávez grow and thrive.”

For the record, everyone seems to agree that he did what he was accused of having done, and that it was illegal; his only defense is that he only did what everyone else does or did (by everyone, I mean every politician in Brazil). Whether this is a viable moral defense I leave for philosophers to decide; but it is a new thing in Brazil for politicians of so high a rank to pay the price of their own corruption. This is either a great advance for the country or a great hazard, for if politicians of another stripe are not held to the same standard and punished in the same way, the supporters of the former president will be able to say that he was not so much subject to justice as the object of a vendetta because of his political tendency. This is a way to serious confrontation.

It was Lula’s demagogic gestures that interested me, however; and I would have taken a bet that his words were of no worth or interest whatever. It occurred to me, in a blinding flash of illumination, that henceforth political debates on television should be conducted soundlessly, the participants having been given as much alcohol as Lula had drunk. In vino (or cachaça) veritas; they should be judged not by what they say, but by their facial expressions and gestures alone. This would be the way to weed out demagoguery; by their grimaces shall ye know them.

It happened that on the way to Brazil I had chosen to read a novel, by Alberto Barrera Tyszka, set in the last days of the appalling Venezuelan demagogue Hugo Chávez. I am not particularly prescient politically, but I knew from the moment that Chávez took power that his rule would end disastrously. Whatever the parlous state of the country at the time he took power, he could only make it worse. (I reviewed a book early in Chávez’s rule by one of those brilliant intellectual fools whose wishful thinking flits like a butterfly from revolution to revolution, and from radical to radical, and who took Chávez at his own estimate.)

Chávez was the kind of leader who could produce a shortage of salt water in the Pacific. It was only appropriate that he should so have admired Bolivar that he named his “revolution” after him, for Bolivar’s life ended miserably and his plans were utterly set at naught. “He who serves the revolution,” said Bolivar at the end of his life, “ploughs the sea”; which might be modernized to “He who seeks to impose equality on Venezuela produces a shortage of lavatory paper.”

Barrera’s book is an excellent evocation of the way in which Chávez, fundamentally a charismatic nonentity, a terminal bore whose mind was stuffed with cliché, verbiage, and resentment, bestrode his country like a colossus, but a colossus inflated with gas, until the very end of his life. He never said in a minute what he could say in an hour; if he had a fundamental belief, it was “I speak to an audience, therefore I am.”