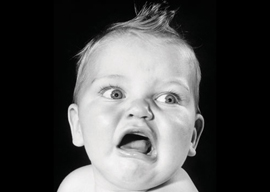 I was reading Eric Dondero’s revelations about the time he spent working as personal assistant, campaign coordinator, and senior aide to Ron Paul.

Dondero plays down Paul’s rumored offenses against political correctness but has a few things to say that are giving liberals the vapors nonetheless. On homosexuality, for example:

Is Ron Paul a homophobe? Well, yes and no. He is not all bigoted towards homosexuals. He supports their rights to do whatever they please in their private lives. He is however, personally uncomfortable around homosexuals, no different from a lot of older folks of his era.

“Bobby,” a well-known and rather flamboyant and well-liked gay man in Freeport [in Paul’s Texas constituency] came to the BBQ. Let me stress Ron likes Bobby personally, and Bobby was a hardcore campaign supporter. But after his speech, at the Surfside pavilion Bobby came up to Ron with his hand extended, and according to my fellow staffer, Ron literally swatted his hand away.

Ron Paul’s instinctive revulsion to homosexuality is common among people whose personalities were formed before the Great Disruption. I myself, born in 1945, share it. Though I also share Ron Paul’s live-and-let-live attitude regarding private lives, I can’t be fully at ease around homosexuals and can’t restrain my instinctive disgust if forced to dwell at length on the homosexual lifestyle.

“If disgust is driven out of one area of life, will it find a new home in some other?”

(I am speaking only of male homosexuality. Nobody cares about the female sort except comedians looking for jokes.)

I’ve written elsewhere that this instinctive disgust is focused on the act of buggery. Whether or not that is so, the disgust was real and widespread until very recently. Check out Chief Justice Warren Burger’s opinion in Bowers v. Hardwick:

Instinctive disgust of the kind Ron Paul displayed with that hand swat is a fundamental component of human nature. It is one of psychologist Paul Ekman’s six basic emotions, the others being anger, fear, happiness, sadness, and surprise. It is therefore no surprise that disgust has been a prime target in the war against human nature that liberals have been waging this past fifty years.

Ethical philosopher Martha Nussbaum is a four-star general in that war. Ms. Nussbaum has argued that past social and legal proscriptions against homosexual acts arose from a “politics of disgust”—disgust being the relevant emotion in seeking to deny people their rights on crudely emotional grounds. By purging all that disgust from the body politic, she says, we have advanced in humanity.