Rick Santorum, I Hate Your Face 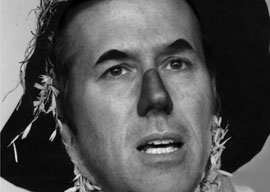 Rick Santorum has been the Republican primary season’s Surprise Moral Warrior. He has already won eleven states, and depending on how he performs in Wisconsin tomorrow, he may continue to battle the icy Mormon cyborg Mitt Romney for the nomination.

Based merely on those who hate Santorum, I suppose I should love him.

Last week he was targeted by the Racism Industrial Complex for allegedly calling Obama a “nig-“ before correcting himself. I”m not convinced he said “nig-“ on that video, but in the past he’s lied about calling people “black,” so it’s possible. Either way, I rate lying as far worse than using forbidden words, but I”m abnormal.

But despite the fact that I hate his antagonists” shriekingly misguided moralism, I can”t muster one positive micron of feeling toward the man. For starters, I have problems with his face. And his personality. And his politics. And his priggishness. And his authoritarian impulses. In politics as in life, the enemy of my enemy is not always my friend. In many cases, it’s merely some other jerkoff I dislike for entirely different reasons.

First there’s his face. Sure, it’s unfair to blame him for that incongruous nose jutting out of his lumpy head as if someone jammed a cheese wedge into a potato, so I will not hold him accountable for what is either an act of God or an accident of nature. But he is entirely to blame for that dorky, smug, imperious smirk that his attitude seems to have forever welded onto his visage. His is the mug of a priggish hall monitor who’s forever smelling something unpleasant.

But it’s so much more than his face. At a regrettably low, sad, destitute, and lonely point in my life a few months back, I found myself watching a couple of the Republican primary debates, and his personality rubbed me the wrong way like a Brillo Pad scraping against herpes sores. Both Santorum and I were raised as Pennsylvania papists, and he conjures distant memories of some generically uptight, passive-aggressive, repressed schmoe I would have hated during my dozen years of Catholic school. The fact that he’s Italian doesn”t help, either.