Ridding Myself of the Day 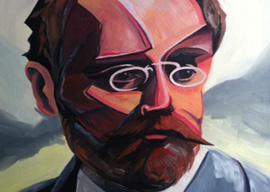 I read a novel over the weekend. It was Ãmile Zola’s 1880 bestseller Nana. A few days previously I’d sat next to Tom Wolfe, the USA’s greatest living novelist, at a dinner and asked him about his own literary heroes. Zola was the first name he mentioned. I had never read a word by Zola, but an endorsement from Tom Wolfe is not to be ignored. On my next trip to the library I took out Nana.

With all love and respect to Tom (who has a new novel of his own coming out October 23), I can’t say Zola swept me off my feet. Possibly I just read the wrong book. There is no psychological depth there, nothing to make one care much one way or the other about the main characters. I kept thinking how much better a job Trollope would have done. I can see how Nana‘s frankness must have been sensational in its time. Today, though, it seems over-colored and garish.

Zola describes Nana as having been “born from four or five generations of drunkards.” Sniffs editor Luc Sante in the 2006 Barnes & Noble Classics edition: “The genetic notions advanced here have long been discredited, although we know that behavior is often handed down through the generation by example.”

Uh-huh. I’m starting to favor a Constitutional Amendment to the effect that anyone saying in print or pixels that such-and-such a notion has been “discredited” should be obliged to tell us by whom the discrediting was done, when, where, with what methodology, and the specific informed criticism that countered it.

“Human beings weren’t made to work, or think much, or read much.”

Anyway, there I was at the weekend reading a novel. Tom Wolfe’s recommendation was only the prompt. It’s been nagging at me for a while that I don’t read enough books, especially fiction. Like the rest of you, I’m too darn distracted by the Internet.

Well, perhaps not as badly distracted as the rest of you. Not as badly, for sure, as the guy sitting next to me on the Long Island Railroad the other day who spent most of the one-hour trip into Manhattan twiddling with a handheld gadget”a smartphone, I guess. From time to time he’d tuck it in his pocket and sit staring into space for two or three minutes, then pull it out again for some more twiddling and scrolling. Addiction? Definitely.

I don’t have one of those gadgets, but I’m sufficiently addicted. Mornings after breakfast I sit down at my laptop and do email. Then I go through my Google Reader roll”thirty or so blogs and websites I like to check general-interest sites such as Discover Blogs, Andy Ross, and ParaPundit; National Question outlets such as Refugee Resettlement Watch and VDARE; and oppositional-conservative bloggers such as JewAmongYou and AltRight. They all have links to follow and video clips to play. After that I scan Drudge and read the online UK Daily Mail and Daily Telegraph.

By now it’s well past midday. Walk the dog. Take lunch. Check back on the Reader roll for updates. Same with Drudge. Check some fun sites and some I can’t subscribe to on Google Reader. Now it’s getting to be late afternoon, and I haven’t done any, like, work.