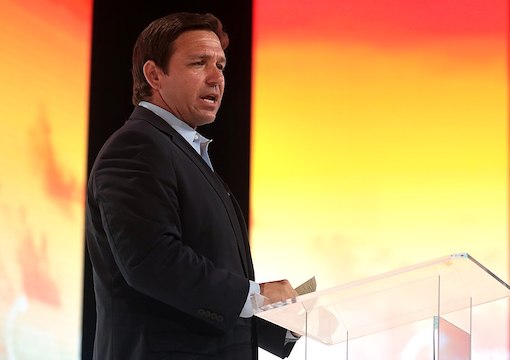 I don’t live by a lot of rules (“socks first, then shoes” is one I find helpful. You’re welcome). But here’s a rule I appreciate more as I get older: Stupid and crazy are traits best avoided.

I can hear you saying, “Dave, that seems obvious.”

But you’re wrong, oh imaginary reader. In politics, there’s a school of thought that stupid and crazy can be useful, that these traits can be channeled. After all, who’s more passionate than the crazy? Who’s more willing to write a check than the stupid?

“Face a stark reality: Wacky has failed you.”

So there’s this notion that crazy and stupid are positive resources; volatile, sure, but if you handle them carefully, they can be at your service.

I’ve never found that to be true. During my years as a ground-level GOP operative, I came to understand that you can employ the crazy for their passion and the stupid for their gullibility, but in the end, at some point, it’ll bite you in the ass.

No good ever comes from crazy and stupid.

Tucker Carlson did a stupid thing to make a stupid point. In order to prove that “the Democrats are the real racists,” he handed his show to a crazy black man, editing out footage that contained obvious red flags that Kanye West was on a disastrous downward spiral. And that single act—a stupid man (Tucker) empowering a crazy man (Kanye) in the name of a stupid talking point—led directly to where we are now, a few days from the Georgia runoff with conservatives knee-deep in a debate over whether saying “Hitler was a great guy and the Holocaust didn’t happen” should get you kicked off Twitter.

I never minded Twitter’s content moderation policies per se; I minded that they were enforced unequally. I minded that a leftist could say “hands up don’t shoot” or “cops took Dylann Roof to Burger King” and that would be fine, but rightists who mentioned Hunter’s laptop (which unlike “hands up” and “Burger King” was not fake) would be banned. I minded that a black person could say “whites should die” while a white couldn’t cite black crime stats. I don’t give a damn what TOS a private site has; what troubled me was that Twitter enforcement not only engaged in viewpoint discrimination (which as a private site it had the right to do) but racial discrimination (a constitutional gray area for non-brick-and-mortar entities, which I discussed at length with legal scholars in this 2018 column).

If Musk wants to say “no swastikas on my site,” fine. Just apply it to everyone, from @BlackHebrewJaQuante to @HimmlerFam1488.

But, of course, rightists took the bait after Musk banned Kanye for Hitler fanboying, and voilà, with all the predictability of dogs returning to their puke, a discussion was born!

“Kanye said some crazy shit,” ceded the “black conservative” Hodgetwins, “but he shouldn’t of been banned. No laws broken, he didn’t incite violence. We can disagree with what people say but that doesn’t mean they should be permanently banned.”

Well, I can respectfully disagree with people politically, but anybody who says “should of” deserves to be brutally murdered.

Wait, I think that was incitement to violence.

Rightist darling Michael Tracey, who aspires to be Jimmy Dore (which is kind of like Dean Cain aspiring to be Kevin Sorbo), angrily noted that even though Kanye “said a bunch of wild stuff” about Hitler (like, wild, man! Far out!), he merely proved that “the standard for getting banned on Twitter is apparently still: ‘if enough people think you’re really bad.’”

“I have no idea what Kanye’s goal is,” Tracey mused, “but if the goal was to reveal the apparent limits of ‘free speech’ on Twitter even under the new regime, he’s done it.”

And once again a paranoid schizophrenic has shown us the way.

Rightist podcaster Elijah Schaffer stopped grabbing the boobs of random women long enough to type, “It’s comical at this point how global leaders demand a new world order in front of a swastika. But it’s Kanye West we are supposed to be worried about.”

And if you’re reading this and formulating your own response to the “should Kanye have been banned” question, I’ll say gotcha, because my point isn’t whether Ye deserved to be banned or not. My point is, rightists got suckered into a pointless debate that associates them with Hitler, and they got suckered into it by the actions of the insane and stupid within their own ranks.

There’s a straight progression from Tucker saying (with his patented high-pitched laugh) “a-haw-haw-haw, my interview with Kanye West will prove we’re not racists,” to Kanye declaring “I love Hitler and there was no Holocaust,” to conservatives becoming obsessed with a new distraction from issues that matter.

The last time the right pulled off anything remotely resembling a national win (and it was a razor-thin win at that), it was by focusing on the simple and relevant. Build a border wall. Put American workers first. Deport criminal aliens.

How the fuck did Hitler and the Holocaust appear in this dialogue? Why are we talking about any of this?

Well, because a dumb guy and a crazy guy collaborated to do something dumb and crazy, the sole, inevitable result of any collaboration between the stupid and the insane.

Be in awe of it, because the ludicrousness is worthy of awe. We’re days away from a runoff that might at least return the Senate to 2021 status quo instead of making it a Democrat duchy, and national attention has been waylaid by the efforts of a gay man whose entire career has consisted of bragging about sucking black dick (which rightists applauded to demonstrate how not-homophobic they are) and who straight-out embezzled from his followers (which was forgiven by rightists to demonstrate how not-homophobic they are), a clinically insane Hitler-loving swastika-posting Holocaust-denying black musician (hailed by rightists to demonstrate how not-racist they are), and a Holocaust-denying incel Hispanic internet troll with zero real-world accomplishments (financially supported by rightists because Hispanics are natural Republicans). And this freakish threesome had a private meeting with a former president who uses social media to claim that Moloch eats American children. And this ex-president allowed the black Hitler-loving lunatic, the white sucker of black cock, and the Hispanic Holocaust denier to dine with him and use him as an op to launch their own presidential campaign, which led to the three stooges appearing on the show of a man who thinks Obama built a phony elementary school and had dwarf actors impersonate children to fake a mass shooting so he could take away our guns (even though he never took away our guns), and the black lunatic uttered pro-Hitler statements on the show that were so outlandish the “Obama dwarfs faked Sandy Hook” guy looked sane by comparison.

That is some downright impressive batshit nuttiness. In six years, the right’s gone from “let’s build a wall to control immigration” and “let’s deport illegals who commit crimes” to a debate about “loving Hitler” initiated by a schizophrenic black man who thinks robot children are haunting his house, a white guy who thinks “I fellate negroes” is a résumé bullet point and who brazenly stole money from his followers, a smarmy Hispanic Holocaust-denying troll who made his name via a cartoon frog, and a former president–turned–2024 candidate who thinks Moloch is eating your children and who’s pledged to campaign on the very issue that wiped out Republicans in the midterms.

I feel like one of those old-timey cartoon “now I’ve seen everything” guys who realizes that having “seen it all,” there’s no more reason to live so he blows his brains out.

Maybe I should’ve gotten the vax after all; “dying suddenly” seems like a decent option right now.

And it gets worse. Kanye’s Holocaust denial, instead of making everyone say “this is irrelevant to the existential threats facing our nation,” has prompted edgy edgelord rightists like “RAMZPAUL” to declare “yes, we should question the Holocaust!”

You owe it to yourself to question how things strayed so far, and to examine your own role in the debacle.

Have you ever excused, in a political or ideological leader, obvious insanity or clear-cut stupidity because you thought, “Well, that guy’s a little off but he’s dedicated! He’s useful for the fight! He’s good for the cause!”

Worse still, have you ever said, “You know, that guy’s kind of a character, but that’s refreshing! That’s what gets publicity. That’s what wakes people up! We need fewer stodgy, dull guys and more colorful characters!”

Face a stark reality: Wacky has failed you. Wacky has taken you far astray from the things that matter. Can we be done with it now? Can we move beyond the wacky phase? Trump’s wackiness has worn out its welcome among the blue-collar right-leaners who gave him his slim 2016 victory. And the wacky characters he brought with him, from “camp Auschwitz” January 6th amateur paramilitary cop-beaters to Milo, Fuentes, Kanye, Cawthorn, MTG, etc., have only succeeded in creating distraction upon distraction and complication upon complication.

There was an episode of the 1980s sitcom It’s Garry Shandling’s Show in which the condo residents meet to perfunctorily elect their unchallenged board president, Leonard. Leonard is terrible. He’s a lousy president; he pilfers the dues and neglects his duties. And just as the vote’s about to take place, a challenger appears: a circus clown (played by Cirque du Soleil impresario Denis Lacombe). And he wows the residents by saying everything they want to hear, all while doing impossible acrobatics and hilarious routines.

So he’s elected, and everybody’s happy, until it turns out that the clown not only has no skills to back up his promises, but via his crazy antics he ends up breaking more things than he fixes. Leonard was bad, but at least he was sedate. The screaming clown turned out to be worse; equally inept, but grating to boot. He didn’t just not solve problems; he caused more of them.

So the residents reelect Leonard. Not because he’s good, but because they tire of wacky.

Please tire of wacky. The way to defeat “Leonard” is with competence, not shtick.

The next time someone tells you “DeSantis is good but dull,” say yes.