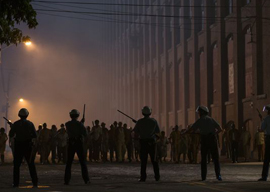 The next year, 80,000 whites moved out of Detroit. (In 2017, the total population of Detroit is almost a million lower than fifty years ago.)

Of course, today we are instructed to think of these white refugees from black violence not as victims but as perps. Almost nobody is interested in the stories of the millions of Americans whose lives were literally dislocated by the huge surge in black urban crime during the peak years of American liberalism, 1964–75.

For example, the opening text for the new movie Detroit, which opens nationally on Friday, pins the blame for the black riot of 1967 on the economic devastation caused by the 22,000 whites who had presciently left Detroit the year before, apparently taking all the magic dirt with them, leaving only the tragic dirt.

In reality, the Detroit Riot had little to do with economic decline. Instead, it was a classic example of how rising expectations fuel resentment. Detroit in 1967 represented the apogee of working-class prosperity, which Detroit blacks shared in due to United Auto Workers’ leader Walter Reuther’s profound opposition to racial discrimination. Perhaps no black community in the history of the world had yet been as broadly prosperous as Detroit’s in 1967. To blacks across America, Berry Gordy’s Motown record label, named after the glamorous Motor City, represented black affluence. Economist Thomas Sowell observed:

Before the ghetto riot of 1967, Detroit’s black population had the highest rate of home-ownership of any black urban population in the country, and their unemployment rate was just 3.4 percent. It was not despair that fueled the riot. It was the riot which marked the beginning of the decline of Detroit to its current state of despair.

“It’s almost as if Bigelow and Boal don’t really believe the politically correct story they are telling.”

Cavanagh, a Kennedyesque young Irish Democrat, had won a stunning upset in 1961 by campaigning against police brutality. He appointed a reformist police chief and instituted affirmative action. He was overwhelmingly reelected in 1965. Detroit was then routinely portrayed in the national press as the “model city” of the Great Society.

But in 1967 the police, at the encouragement of black Baptist ministers wishing for their neighborhood to be cleaned up, raided an unlicensed after-hours bar. Interestingly, the movie, which often shows a different view of reality than it tells, depicts the raid as being led by a black officer. Still, neighbors threw bottles at the cops, who, following Detroit’s then-celebrated liberal doctrine of not provoking riotous ghetto dwellers, retreated. To celebrate their victory over the forces of law and order, the locals began looting shops.

The rioting spread as the police stayed back. Mayor Cavanagh, Governor Romney, and President Johnson were each reluctant to agree to send in more force. And when they finally realized the need, they were then still averse to cooperating with their potential rivals. (Romney was widely considered the GOP front-runner to meet LBJ in November 1968. In reality, however, none of the three liberal politicians’ careers recovered from the Detroit Riot.)

Eventually the riot got so out of control that military tanks were sent in. Reportedly, one shelled a church steeple from which sniper fire was said to be coming.

How serious was sniping during the Detroit Riot remains controversial. It was widely reported at the time. And the 2,500 looted hunting rifles seem like a threat.

But on the other hand, a dedication to the craft of trigger pulling seems like a very white thing. For example, Clint Eastwood’s American Sniper was extraordinarily popular with red-state white audiences. Similarly, the greatest sniper of all time, Simo Häyhä, the Finnish soldier who killed 505 Soviet invaders in 1939–40, was appropriately known as “White Death.”

On the other hand, as we saw in last year’s Black Lives Matter massacre of five Dallas policemen that helped keep Hillary Clinton from becoming president, a little military training can go a long way. And many Detroit blacks in 1967 had been through the draft and basic training.

Detroit is directed by Kathryn Bigelow (who rightfully became the first woman to win the Best Director Oscar for The Hurt Locker) and is written by Mark Boal. (Their last film together was the successful Zero Dark Thirty about the hunt for Osama bin Laden.)

Although Detroit’s opening text regurgitates The Narrative as faithfully as any 23-year-old Atlantic intern, Bigelow and Boal actually are ardent militarists who love a man in uniform. The main theme of Bigelow, a former wife of James Cameron, has been, at least since Point Break a quarter of a century ago, an admiring dissection of male obsessiveness.

Historian Robert Conquest’s law is that “Everyone is conservative about what he knows best.” Expert movie directors, such as Bigelow and Christopher Nolan, tend to be natural conservatives working in an environment where they are supposed to wear their allegiance to progressive dogmas on their sleeves.

Thus the best part of Detroit is the first half hour, which is devoted to showing who started the riot and just how horrible a lack of law and order is.

After that, unfortunately, Detroit turns into a slog of a rehash of a notorious incident of white police brutality at the Algiers Motel on the third day of the riot.

Obviously it’s absurd to blame the giant riot on a psycho cop’s overreaction to it 48 hours into it, but that’s what the white establishment has been doing for a half century now. The famous journalist John Hersey (Hiroshima) rushed out a best-seller in 1968 called The Algiers Motel Incident about the three blacks shot at a house of ill repute, presumably by some combination of three white cops.

The policemen and a black security guard who voluntarily assisted them were charged five times by various organs of government over the next half decade, but no juries could be persuaded to find them criminally guilty beyond a reasonable doubt based on the often contradictory testimony of whores and felons.