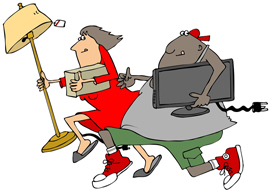 It’s fun watching the pundits on CNN try to intellectualize the riots in Charlotte. They bounce stats around and wonder aloud if the protesters are more angry about 19th-century lynchings or 20th-century segregation. They keep talking about bus seats and Alabama like anyone throwing a brick gives a shit. We all know Keith Scott was not reading a book, just as we know these rioters don”t read books. Do you expect an apology when we find out the cop was justified? Of course not. Nobody on TV seems prepared to face the truth, which is, these stupid kids are rioting because it’s really, really, really fun. That’s it. The same was true of the Rodney King riots and the riots in Ferguson. All vandals need is a semblance of a meme for justification and they”re good to go. To pretend it’s anything more than that is to tell your rapist you”re a Malcolm X scholar in hopes that he”ll stop.

Smashing windows and running through the streets lighting fires is “the unbeatable high,” as Jello Biafra put it in the Dead Kennedys” classic “Riot.” You can see that in their faces. They”re laughing, mugging for the camera, and jumping up and down like kids in the mosh pit. They”re not revolutionaries. They”re spoiled brats. This is laser tag to them.

The people we see trashing Charlotte are mostly black, predominantly young, and without a doubt wildly disproportionately the children of single mothers. Like all American cities on the verge of collapse, it is a Dem-run catastrophe that provides pregnant teenagers with a financial incentive to tell they baby daddy to peace out. The result is not a generation of black-power intellectuals who pore over history and plan their next strategic attack. It’s a demographic that puts partying and self-indulgence over everything.

Taleeb Starkes just did a brilliant video for Prager U entitled “Top 5 Issues Facing Black Americans.” He cites: Unquestioning Allegiance to So-Called Progressive Policies, Proliferation of Baby Mamas, Urban Terrorism, Lack of Diversity (of Ideas), and the Victim Mentality as the reasons his race is in a perpetual state of decline. I”d argue they”re all the same thing. The left tells blacks they are at a disadvantage due to racism and that no matter how educated a black man is or how hard he works, he will always be treated as a second-class citizen. To rectify this injustice, they throw taxpayer money at the problem. The free money provides the victim mentality and that leads to the extra baby mamas. It’s not questioned because nobody wants to bite the hand that feeds them. That’s four of the five and “Urban Terrorism” is the fifth, which is what we”re experiencing in Charlotte now. That stems from boredom which comes from having no dad which comes from welfare which comes from Democrats. The blog Handle’s Haus has a very stark and disturbing take on this phenomenon:

The problem is that while “poverty” does not cause crime, idle hands are the devil’s workshop, and a heavy-concentration of young men who are either not willing or able (or both) to hold down a job and get busy raising a family is a well-established recipe for disaster that was known to the ancients since time immemorial. This problem exists in our pockets of crime, no one has any good and politically-palpable idea of what to do about it, and the accelerating three legged stool of immigration, automation, and globalization is making it increasingly worse.

Handle goes on to blame boredom for the drug war and says mass incarceration is your only option when dealing with a generation that’s never known discipline. It’s not a revolution. It’s fatherless kids looking for something to do. This makes a lot more sense than some kind of Black Panther covert op involving the empowerment of the underclass.

We tend to imbue our own pontification on everyone else because as a culture we were cursed with too much empathy. If jihadists blow up a building, we go back to the Crusades and try to determine which Christian transgression they are retaliating against. ISIS are nothing more than inbred sand people who have memorized a book that keeps repeating, “Convert or die.” They are basically Koko the gorilla in a terrible mood. When Osama bin Laden said 9/11 was about our foreign policy, he was simply parroting what we think would give him the most credence. To take him seriously is to make him Western.

During the early stages of the rioting, an overfed black girl in a MÃ¶tley CrÃ¼e shirt confronted a Fox News reporter. The rhetoric she barfed out was so rehearsed it sounded like the lyrics to a punk anthem. “Black people get shot every day, right?” she explained. “It’s okay for that, right? It’s okay for our brothers and our fathers not to come home, right? I serve a purpose, sir. My father serves a purpose. My brother serves a purpose. Whether I”m here, I”m in school, I”m in my car, I could still get shot by the police. I could get shot anywhere.” Cue the heavy bass line as she stage-dives into the crowd. The reporter then alluded to the fact that the protester who was just shot was likely shot by a random black person and not a cop. This allegation, while true, was met with apoplectic screaming and violence, so the news crew quickly moved on. About 3,400 blacks were lynched throughout American history. As Starkes points out in his video, blacks kill twice that many blacks every year. I”d understand the rage if death-by-cop was even in the same universe as death-by-black, but we”re talking about a 1,000-to-1 ratio. To bring this up, however, is to wreck the party, and nobody likes a buzzkill.