Robot Hookers of the Near Future 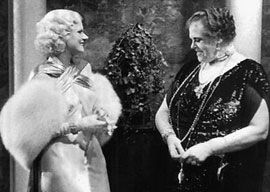 Harlow’s Kitty, a ditzy platinum blonde gold digger, fairly knocks Dressler’s Carlotta off her feet when she pipes up:

Kitty: I was reading a book the other day.

Kitty: Yes. It’s all about civilization or something. A nutty kind of a book. Do you know that the guy says that machinery is going to take the place of every profession?

Carlotta: (Looks Kitty up and down) Oh, my dear, that’s something you need never worry about.

It’s funny cuz it’s true”but for how much longer?

“Do futurists ever worry that machinery will take their place?”

In a new scholarly paper, two New Zealand professors predict that in the near future, robot prostitutes will offer “a range of sexual gods and goddesses of different ethnicities, body shapes, ages, languages and sexual features.”

Of course, high-tech hookers are a standard-issue science-fiction trope. In meatspace, though, would more than a few curious or desperate men hire one? Yes, I know, guys don”t pay prostitutes for sex, they pay them to leave. No doubt that mission-critical function will be one of the first to be programmed into bimbo-bots (which will also possess another transhuman advantage right off the assembly line: no gag reflex).

Assuming these automatons were also sufficiently visually and tactilely appealing, they”d probably satisfy the basic male desire for variety, which has been known to trump even beauty as a boinkability benchmark. (See “Brown, Divine.”)

(Although if calls to the London Fire Brigade are any indication, some fellows won’t be bothered if robot prostitutes don’t look sufficiently human. Last week, the department felt compelled to warn gentlemen not to abuse emergency services”and their most sensitive bits”by sticking their dicks into toasters.)

So those are some features, but here’s one bug: Many men engage prostitutes (and toss money at strippers) as a power move, a chance to play puppet master. Can the resulting frisson be replicated when the object of one’s objectifications is an actual puppet with no capacity for humiliation or refusal?

As futuristic prognostications go, that one about Westworld-type tarts is pretty old hat. So are most predictions that professional futurists make, as a matter of fact. These highly paid consultants are mostly just glorified carnival cold readers, oh-so-boldly declaring that one day we”ll all live to be really, really old and no one will have or need a boring job”presuming, that is, we all survive whatever Y2K of weather is currently in vogue.

The only thing notable about these present-day predictions is how closely they resemble the ones we”ve heard all through the past.