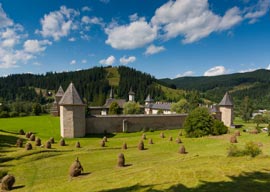 Rains finally came. The dog days came to a pause for two days, but Bucharest was still hot. We drove to Tulcea”the quiet of a small town in a poor province on a summer afternoon”and took the speedboat to Chilia, which gives its name to one of the three branches of the Danube Delta. The Danube, which is a polite city river when it runs through Vienna, Budapest, and Belgrade, finally polyfurcates before it reaches the Black Sea. The little-visited delta is the place where Europe reaches an end. It’s possibly the last truly wild part of the continent.

Chilia is separated from New Chilia, which is in Ukraine. Its factories are seen across the river, but the ferry crossing was discontinued after the 1989 revolution. Many of the 4,000 inhabitants of Chilia have relatives in Ukraine but do not see them. Anca Plesca tells me that to do so would not only involve going to Tulcea to get one’s passport stamped but paying $200 to have the customs opened up by Ukraine in order to receive them.

Mirel and Anca Plesca have opened a hotel in Chilia called Limanul Resort, which has been recommended to us by our Saatchi & Saatchi friends in Bucharest. Anca Plesca, like most Romanians I know, was reared by her grandmother in a country village, and this was her village.

We brought Claudio Magris” astonishingly good Danube and several guidebooks. They recount the history of Chilia, but it has very little history. One monk left a record that slaves were embarked there in the 11th century. A reminder that slavery was universal in Europe at that time. It existed in what is now Romania until the time of the American Civil War, by which time gypsies were slaves. Ethnic Romanians were serfs until the same time.

That’s almost it until the War of Independence of 1877″78, so-called, in which the Romanians were inveigled by the czar to fight for Russia and Bulgaria. Romania’s reward was to gain its nominal independence (it already had home rule from the Sublime Porte), to lose Bessarabia (approximately what is now the Moldovan republic) to Russia, and to be given in exchange a stretch of scantily populated coast called the Northern Dobrudgea, which included most of the Danube Delta. The Dobrudgea had little connection with the Romanians, but its Muslims, Greeks, and Jews have mostly left by now and it has been Romanian-ized.

“All our life long we go from one spot of holy ground to another, according to John Updike. This is even more true in Romania than elsewhere.”

The Danube Delta has 20,000 inhabitants, making it the most sparsely populated area in Europe below the frozen north. It was and remains populated in large part by Lipoveni, Russians who had fled to the delta to escape religious persecution in the time of Peter the Great. Lipoveni are renowned for the beauty of their women and their almost limitless ability to drink vodka, tuica, beer, and industrial alcohol. They can even drink the turbid waters of the Danube itself. They talk an archaic form of Russian and listen to Ukrainian pop music on transistor radios in the village bar.

But the delta is a place innocent of history and long in natural history. The delta is the third-most important biosphere reserve, a term I don”t fully understand but which I think means home for flora and fauna. The Great Barrier Reef is first.

The joy of traveling in Romania is staying with peasants. Limanul Resort is not that, but it is something surprising”it is cool. Cool, until about five years ago, was unknown in Romania. I do not entirely approve, but it makes a nice change from most Romanian hotels, which are in the most terrible taste imaginable, unless built before Communism. The resort has been beautifully designed by a good architect, and design means a lot. It’s comfortable, and though peasants charge only ten euros, the 50 euros the hotel charges is not exorbitant. One of our group was shocked it was so cheap. He is used, he said, to comfortable hotels in Transylvania that charge twice as much. Poshness, to my regret, has come to Romania.

One drawback, though: It is not on the water but a five-minute walk away, close to Chilia’s extraordinary church, which is the highest Orthodox church in Romania. Why so small a place has so imposing a church I don”t know, but I imagine that it was a statement that the Turks were no longer masters here. The Turks forbade high churches, which is the reason other churches in the Dobrudgea were built half underground.

The food at the resort is very good. We ate a wonderful fish dish where the outside of the fish had been emptied and filled with minced fish meat. We had some good fish borsches. We drank very much local tuica”plum brandy”but was it local? I saw no plum trees. It was at least weak and I drank several, usually a very unwise course of action. The others complained, but I was thankful.

This is, however, not the right way to see the delta. The right way is camping by the shore of the water with mosquito repellent. We saw many people doing this as our speedboat took us through the delta. Solitary men who looked like hermits, visionaries, or men on the run from the police. In fact, in a country that is very conformist, here is where the nonconformists go. They are the Romanian equivalent of hippies, but a great improvement over hippies.

This is my sixth expedition to the delta. Once, the delta was crisscrossed by natural water channels, but more and more canals have been built. They are straight and at times they become dull. At other times, I was reminded of sailing a dhow in a mangrove swamp in the islands of northern Mozambique. But all this is so close to Europe, is in Europe.

The rivulets are studded by fishermen’s cottages, which fishermen use only occasionally, and where benches are available in the shade. I read; my companions paddled; one of us, who was a professional photographer, took pictures.

The beautiful moments are the storks, pelicans, all manner of birds, which suddenly fly up from the reeds. The lakes are where the birds suddenly fly up en masse, driven by a divine impulse to find happiness.

Outside the delta, empires rose and fell. The Turks came and after many centuries left. The Communists did the same much more rapidly, but in the delta very little has changed. Florin, our boatman, regrets the passing of Communism. He is a Lipovan in his 50s. Many or most people of his age and education in Romania feel the same, and he is probably right, from his point of view. The Lipoveni always had plenty to eat, even in the 1980s.

Florin takes us to the little wooden monastery of St. Athanasius, which I first visited years ago. It was founded by some monks in the early 1990s who, looking for a site, got talking to a local fisherman who donated his land for the monastery. Living there now are six monks and a charming man called Emil, who dedicates half his year to helping the monks and the other half to working in Italy to make enough money to keep himself. Monasteries appeal to Romanians, and lots of people come and go. I”d like to stay there, but one can only stay by permission and the monk I spoke to didn”t seem keen on extending an invitation to me, even though Emil told him that my companion had made a substantial donation to a monastery in Bucharest.